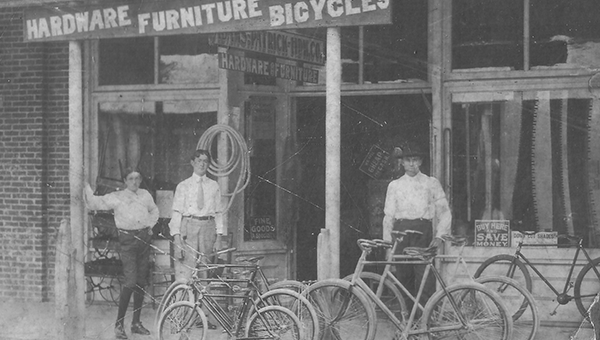 “Give My Regards to Broadway” by George M. Cohan debuted in a Broadway musical in 1904. “Madame Butterfly” by Puccini premiered in La Scala Opera House in Milan, Italy, in the same year.

Right here in Covington County, the T. A. (Thomas Arthur) Patrick family established a business in Andalusia on the Public Square that began around 1904. It is said that Mr. Patrick rode into Andalusia on a bicycle with $100 in his pocket in 1901. He established the Patrick Hardware Company on the South Court Square where Ward and Company is now located. An old photograph shows a large mural painted on the west side of the building, “Hardware and Furniture, Sporting Goods. We exchange hardware for chicken and eggs. Buy here. Save money.”

The money in his pockets when he came pedaling into town had been earned working for the Jackson Lumber Company in Lockhart where he helped build the big pond at Lockhart that was the haven of many fishermen.

Patrick remembers, according to several articles written in the Andalusia Star-News in 1951 and other editions, business enterprises that were in operation just after the turn of the century in Andalusia. Dunson’s Livery Stable situated where Consumer’s Ice and Cold Storage plant was located at the time was just a block off the square. The general merchandise stores around and about the square were W. R. Tisdale, J. D. Henderson, Joe and J. W. Shreve, Brown and Broughton Drug Store, and V. L. Phillips Grocery where Pelham Walgreen Drug Company was situated on the southwest corner.

The courthouse with the clock tower was in the center of the square at that time. The four brick and stone structures that Patrick remembered were the Milligan, Henderson, Shreve, and Sentell buildings, all located on the unpaved square. A bank stood where the theatre is now located. A saloon operated by Fletcher and Campbell stood on the site of the present skyscraper. The (wooden) Methodist Church was at the Evers building site (across from the present fire department).

The road that some called the Old Three Notch Road cut across the square diagonally from East Three Notch to South Three Notch then on out toward Rome (as was written in the old newspapers). There were Chinaberry trees spaced at intervals around the square. Children played under these trees in the daytime. Men often rested their oxen under the shade of them. At night the hogs would gather from surrounding forests to stay at night under their sheltering boughs.

The Patrick Hardware Store eventually became the Patrick Furniture Store, a leading one for this area. The October 4, 1924 edition of the Andalusia Daily Star reports, “Patrick Furniture Co. is New Company in Andalusia. Announces the opening of its new business. This company is intended to engage in the general RETAIL FURNITURE and UNDERTAKING business. We have provided in our store a large and commodious display room absolutely dust-proof where our large line can be easily seen and selections made. We have now ordered a full line of new furniture which we expect in a few days. It will be worth your time to see this line and get our prices. In our undertaking department, we will have the best line of caskets ever shown in this section. We have a handsome motor hearse and all equipment to properly handle any funeral. Service will be our motto. West Side of Square.”

Patrick built the new building for his furniture store on the west side of the square where Walker Business and Gift is now located. Many families purchased basic furnishing for their homes from it. My maternal grandparents, the Brunsons, bought their Queen Ann dining room furniture there not long after they were married at which time they built their new house in 1922. That furniture is now in our own dining room. The Patrick Furniture Co. label is still affixed to the bottom of the table.

Thomas Arthur Patrick in the furniture store on the Square.

For some 60 years, there was a Patrick firm, either hardware or furniture, located on the Andalusia square. The business served several generations. Merchant Mr. T. A. Patrick passed away in 1956 after establishing big business, building a main street home, and rearing a family-all in the first half of the 1900s.

Mr. Patrick also organized the funeral home which was operated out of the back of the furniture store for several years. Partnered with Henry Bullard, the business was called Bullard/Patrick Funeral Home at first. It was later moved to the intersection of West Watson Street and Auburn Avenue across from the old hospital site now known as the Rose Communication building. Mr. T. A.’s son, Bonner, became the mortician for the Brown’s Service Mortuary. Bonner was married to Margaret Murphy.

A few years after T. A. Patrick established his hardware business, he married Laura Bonner. Their children were Elizabeth, Bonner, James, Rosalie, and Louise. Mr. and Mrs. Patrick were affectionately known as “Papa Pat” and “Mama Pat.” The family lived in the turn-of-the-century Victorian style home with wrap-around porch at 521 South Three Notch Street. That stately residence is still standing and reminds us of days gone by.

Mrs. Patrick who was described in a 1966 Ed Dannelly column, “In the Andy Swing,” as a member of one of Covington’s pioneer families with a long record of love and devotion to her family, friends, clubs, and church was nominated for Alabama’s “Mother-of-the-Year” award launched by her sister members of the Study Club. Editor Dannelly wrote, “Mrs. Patrick is just the lady who brightens the history pages.”

One of my very best friends growing up was one of “Mama Pat’s” granddaughters, Margaret “Mickie” Patrick, Bonner’s daughter. Mickie is a member of the AHS Class of ’65. She and I sang in Glee Club ensembles together and learned to drive straight-shift cars together in our parents’ back yards after school in the afternoons. She lives in Huntsville today and is still a talented artist who hails from Andalusia. She has often told me that she creates her watercolor paintings best when she is visiting home in Andalusia. I think of her especially in the springtime, because painting flowers on canvass is her specialty. She spent many growing up days and ate many meals at her grandmother “Mama Pat’s” who was known for her artistic flower arranging. It is certain that the vision of those spring flowers displayed on her grandmother’s table is still foremost in Mickie Patrick Chapman’s mind when she paints. I REMEMBER WHEN Mickie and I used to play on her grandmother’s wrap-around porch and swing together without a care in the world.

In my historic collection of old Andalusia, I have a hand-written prayer penned by “Mama Pat.” Let me share it with you. “Oh, God, our heavenly Father, we humbly thank Thee for this food which comes from Thy gracious hand. May it give us strength with which to serve Thee. Teach us to feed daily upon the bread of life, growing more like Christ in word, thought, and deed. In our Lord’s name, we pray. Amen.”

Thanks to another of “Mama Pat’s” granddaughters, Jackie Hodges Earnest, Louise’s daughter, who lives in Deatsville who recently sent the Three Notch Museum a collection of Patrick Hardware and Furniture Company photos and other memorabilia. Visit your local history museum soon where “There is a history in all men’s lives.”

Sue Bass Wilson, (AHS Class of ’65) is a local real estate broker and long-time member of the Covington Historical Society. She can be reached at suebwilson47@gmail.com.