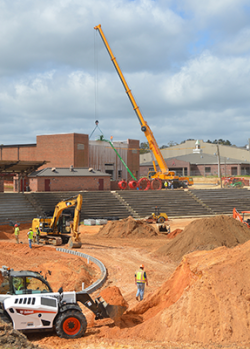 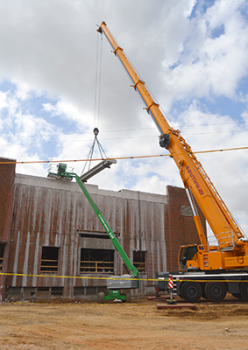 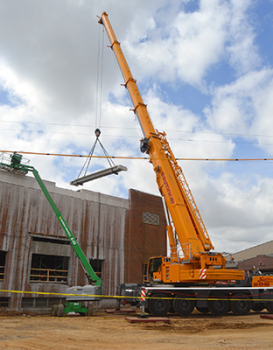 Construction crews work on the AHS auditorium (background) and football stadium (foreground) Wednesday. A portion of the auditorium roof was removed to begin construction of a fly tower.

Construction workers used a giant crane to begin removing the concrete roof from the stage-end of the Andalusia High School auditorium on Wednesday.

Plans for the renovation of the AHS auditorium call for additional height above the stage area so that a fly loft can be added.

Brian Ray of Wyatt Sasser Construction explained that the concrete roof had to be sawed into manageable pieces before they could be removed. A temporary roof will be put in place, 18 feet will be added to the exterior walls, and a new roof will be added.

Meanwhile, additional crews were moving dirt for the construction of the plaza of the AHS stadium, working on the drainage system for the football field, and working on the foundation for the building that will house dressing rooms for visiting football teams, soccer teams, and softball.

The stadium is expected to be completed in time for football season.