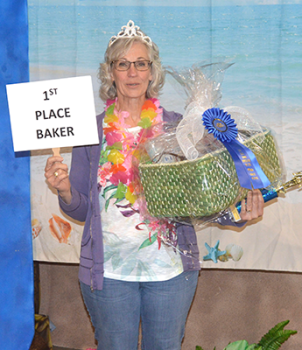 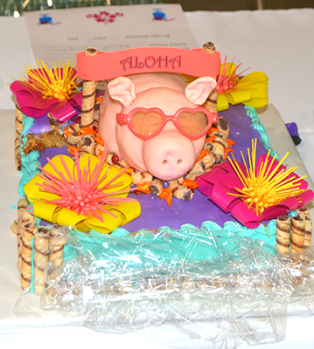 Szarek created this "pig roast" for the cake contest. 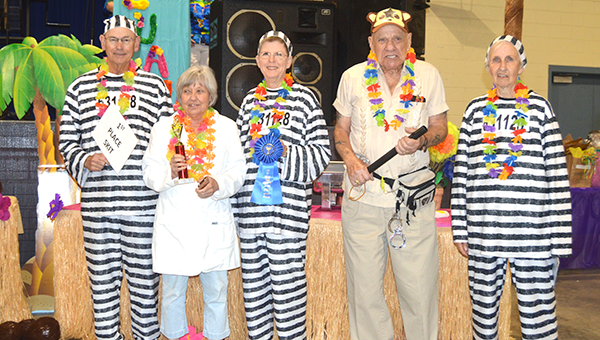 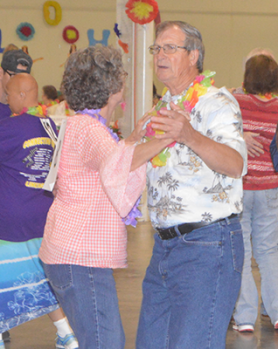 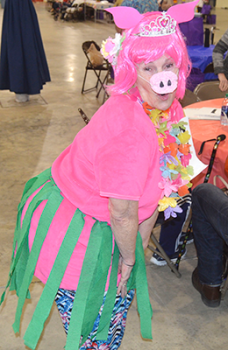 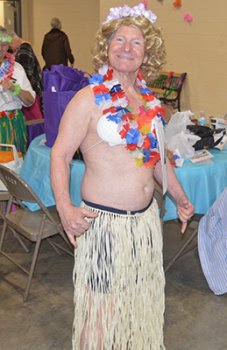 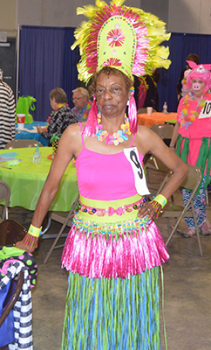 Laura Henderson made her costume by hand. Seniors from DeFuniak Springs won most of Thursday’s contests, but said they work toward that goal much of the year. 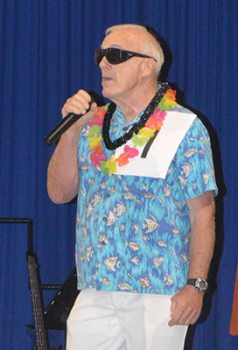 Sonja Godwin gave a speech at the opening ceremonies of this year’s senior appreciation day in which she described what the hand gesture shaka, or “hang loose,” means.

“The meaning of shaka is feeling of gratefulness,” Godwin said. “And with that being said, I am so grateful you all are here today.”

This year’s senior appreciation day was luau themed, and the entire Kiwanis Center was decorated for the occasion with palm trees, bright colors and a papier-mache roasting pig. There were several contests for the attendees and one group stood out above the rest.

The Life Enrichment Center from DeFuniak Springs, Fla., took the stage by storm as they won every category except for the dance contest.

“We have been coming to this event for about eight or nine years,” Susan Buckalo, the group’s director, said. “It gives us something to spend all year working on projects for.”

The Life Enrichment Center won the talent contest, the costume contest, the banner contest and the skit contest. They had 43 members at Thursday’s event.

“Not a lot of people signed up for the contests so we were able to win a lot of them,” Buckalo said. “I hope they see what we have done and it will encourage other groups.”

One interesting thing about the costume that first place winner, Laura Henderson, won with, is that every single part of the costume was hand-made.

“I worked very hard on it,” Henderson said. “From the head-piece all the way down to the skirt, it is hand-made.”

The dance competition was a fierce battle, but the first and second place winners are no strangers to the dance floor.

Gary Grantham was the winner of last year’s dance competition and this year he came in second behind his wife, Diane Grantham.

“We love this event, every year it is so good,” Mr. Grantham said. “The band is amazing and I just love what they have done with the Hawaiian theme.”

“The theme was what I went off of,” Szarek said. “I know that they have roasted pigs at luaus, so I wanted to start with that and see what I could come up with.”

Szarek said that she used fondant for the decorations and made the rest of the cake from scratch.

“I made the cake gluten free and with no mixes because I don’t eat any gluten,” Szarek said.

Although most of the attendees would say the event was a success, Godwin had a different thought.

“We didn’t have half the people come as we did last year,” Godwin said. “I want to blame it on the weather, but there is no telling. We want to keep this event going as long as we can, but if people don’t show up then we can’t do it.”

Johnson estimated around 500 people were in attendance, while last year they had 800.