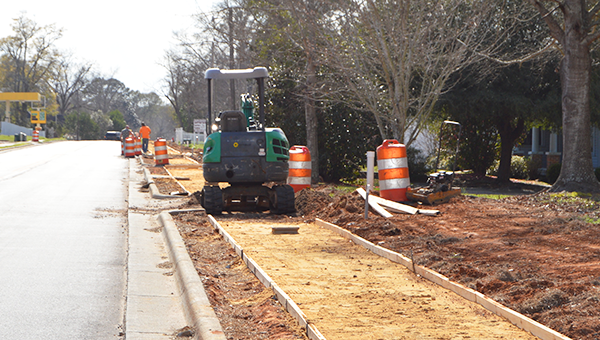 Crews are shown building sidewalks on South Three Notch in February. As of Tuesday, the project was 85 percent done. File photo

“They’ve still got to finish the sidewalk,” he said. “And they have to install the decorative lighting on the downtown side of the project. Our utilities crews will do that.”

The State of Alabama awarded Andalusia an $8.6 million ATRIP grant in 2013 for the repairs to the southern entrance to the city. The project required a $2.1 million local match. ATRIP is a program then-Gov. Robert Bentley designed in which future federal dollars were pledged against a bond issue to fund current projects.

Wiregrass Construction won the bid for the project, which is being managed by the State Department of Transportation.

The project was in the planning and design phases from 2013 until November of 2016, when work began.

Working speedily through a light agenda, the council agreed to spend $5,000 for new furniture at the Andalusia Public Library, purchasing employee desks and some comfortable furniture.

Recently, city crews have built a new circulation desk, painted and installed new carpet in the facility. Bathrooms also have been repaired and updated.