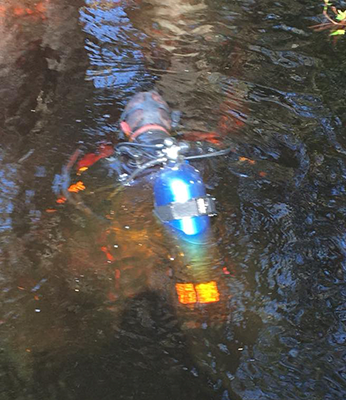 A member of the Opp Fire Department dive team looks for clue in a creek near Falco Road.

On Monday evening, the Opp Fire Department posted on social media several pictures of its dive team in a creek. The photographs were taken March 24. The OFD only said the dive team was assisting the Covington County Sheriff’s Office and the DA’s office.

Sherriff Dennis Meeks said Tuesday that the dive team was diving out in a creek near Falco Road where a shooting occurred on March 16.

The suspects were Jake Alan Cox and Johnathon Steele Cox, both arrested and charged for attempted murder, robbery first and shooting into an occupied vehicle. Their bonds were set at $650,000 bond.

“We were looking for anything that might have been missed from the shooting,” Meeks said. “I didn’t honestly expect we would find anything but it was something we had to do.”