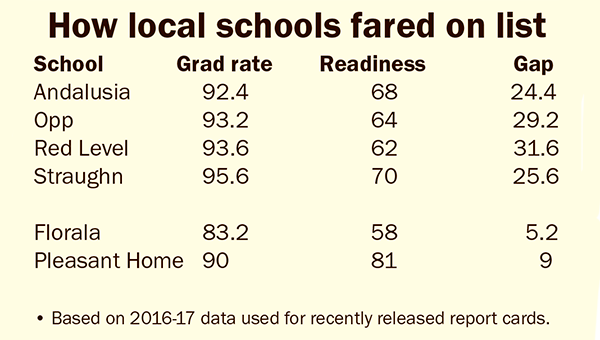 Four high schools in Covington County were among the more than 150 Alabama interim state superintendent Dr. Ed Richardson called out recently for not preparing their high school graduates to either go to college or begin a successful path to a career.

In a strongly-worded memo to superintendents statewide in March, Richardson wrote, “This is one of the most serious issues facing our schools.”

“Failure to address this issue immediately,” Richardson wrote, “will only result in more high school graduates and their families being led to believe they are ready for the next step in their lives when they are not.”

Richardson’s strong words were based on 21-percent gap between the state’s graduation rate (87 percent) and its college and career readiness rate (66 percent).

Those college and career readiness indicators, from the 2016-2017 school year, counted as part of the grade in the state’s recently-released report cards.

Richardson’s memo contained a list of 155 schools with a 12th grade, nearly half of all of those in the state, in which that gap is more than 21 percentage points and the college and career readiness rate is lower than 66 percent.