Remember when: New life infused into Andalusia in ‘01 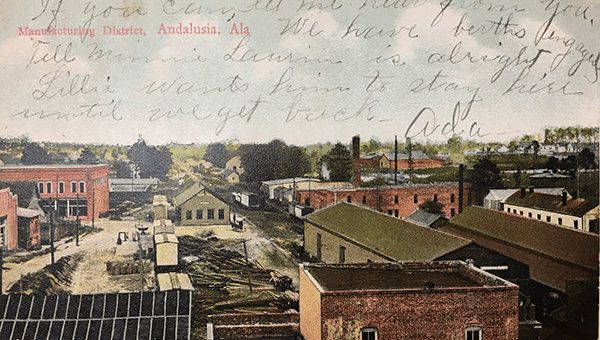 “Stars and Stripes Forever” by John Philip Sousa, a patriotic march, was one of the top 10 songs on the U. S. Billboards in 1901. By a 1987 act of Congress, it became the official National March of the U. S. A. Its military march form draws enthusiasm from all who listen to bands play this widely recognized tune on Memorial Day, Veterans Day, Fourth of July, and other patriotic occasions.

From The Enquirer, March 1901 edition, I quote the editor, J. S. S. – “The Andalusia of today is almost a different place to the town of three years ago. Almost a new place has sprung up like magic, and there are now nearly a thousand people here, and down to this part of Alabama, enterprise and growth are almost synonymous with Andalusia.”

“When Covington County was laid out in 1834, the country seat was established at Montezuma, four miles from the present court house on the Conecuh River just below River Falls. In 1854, however, the river overflowed so badly that Montezuma was completely wiped out and Andalusia was then made the county seat. There is now nothing left of the old town of Montezuma. For many years Andalusia which was off the railroad went on the placid way of a dull inland country town, growing very slowly; but since the coming of the first Central of Georgia train into the place year before last (1899), things have changed like magic!”

“Up to the time the L & N Railroad started to build from Georgiana to River Falls, not a mile of rail had been laid in the county. Then the Central of Georgia extended its line sixteen miles from Searight to Andalusia. The L & N finished its line from Georgiana 33 miles into Andalusia and on from Andalusia to Geneva 46 miles.”

“Mr. G. R. Farnham, of Evergreen, one of the leading lawyers of Alabama is in town today. This is his first visit here since 1888 although Evergreen is but 36 miles away. He was greatly impressed with the wonderful change that has come over the town in the last few years. Houses and various mercantile enterprises have sprung up, and all who come to the place are impressed with the fact that new life has been infused into Andalusia.”

“The express agent and agent of the Central Railway is P. T. Pitts and of the L & N Railway is E. M. Lewis.”

“There are 2 barber shops, kept by B. F. Stewart and J. A. Prestwood respectively.”

“There is one furniture store, kept by H. J. McLendon & Co., in whose store is the Western Union Telegraph Co.’s office.”

“The 12 dry goods stores are kept by J. D. McPherson and Brown & Broughton.”

“C. J. Ward is the watchmaker and jeweler of the town.”

“The 2 meat markets here are kept by F. E. Frazier and Mr. Prestwood.”

“Andalusia has 6 hotels, 2 of them kept by William Riley, G. W. Dunson, and the others being the Smith house, Moran house, Commercial house, and Gantt house. Boarding houses are too numerous to count.”

“Andalusia has 2 excellent newspapers. The oldest is The Covington News published by W. H. Jones who will move into the national bank building (site of the present theatre) as soon as it is completed. His new office will be a model one having completed facilities in every respect. The Covington Enterprise is published in the Sentell building (Attorney Wayne Bush’s office today) by the Enterprise Publishing Co.”

“The Covington County Cooperage Co. has a big barrel factory here employing 30 hands and supplying all the turpentine distillers in this immediate section with barrels.”

“The Andalusia Variety Works is a consolidation of all the little concerns of the kind that have started here, and can turn out many things (carpentry and construction) usually made in a country town.”

“The national bank will open its doors as soon as its handsome building is completed. Mr. C. A. O’Neal who will be its president is building a $5,000. residence (on East 3-Notch St.). Mr. Will Shreve has also completed a residence which would be a credit to any town.”

“In A. N. Peach (Professor Peach), Andalusia has an excellent school principal. He is assisted by his excellent wife, Mrs. Peach. The school has over 100 pupils. The town has been authorized by a late act of the legislature to sell ten thousand dollars of bonds with which to build an up-to-date school house.”

“3 large lumber companies have recently been incorporated in this vicinity with a capital of one hundred thousand dollars each. They are the Berry Lumber Co. at Foley, 12 miles east; the Hudson Lumber Co., of Sanford, 6 miles east; and the Andalusia Lumber Co., 15 miles south. There are many small saw mills near the corporate limits of the town.”

“In addition to the wealth of pine in this section, there are many varieties of valuable hard woods. One saw mill near here turns out hard wood products only. The railroads are daily appreciative of the splendid timber with which this section abounds, and the long stretches of virgin forest to be found in south Alabama are partly responsible for the unusual amount of railroad building down this way during the past year or two.”

If we can imagine life in Andalusia in 1901, we will be reminded that people listened to their home radios especially at night after supper – for news, entertainment, and music. “The Stars and Stripes Forever” surely must have rung out over the air waves. Patriotism was quite popular then since the Spanish-American War (1898-1901) had just ended in March of 1901 about the time this article was written in a local publication. The Panic of 1915 and World War I were not even history yet.

Looking at all of these names and events listed above may have been a little bit boring, but you readers may recognize family names of those who are still in this area. It is amazing and inspiring to me to see how a little village of 250 in 1899 was transformed into a town of 5,000 by 1920. In just one year after the railroad tracks were laid and a train line was established, the population doubled to 500, and the town started growing by leaps and bounds. Transportation is most definitely the key to business and industry taking off and a community’s growing.

I am appreciative that J. S. S., whoever he was, wrote the 1901 article so we can all REMEMBER WHEN blacksmiths, livery stables, dry good stores, shoemakers, mercantile stores, saloons, meat markets, hitching posts, and boarding houses were important landmarks in the little town of Andalusia, the county seat. “Things changed like magic,” the writer stated.

Maybe 117 years from now, someone will browse through the 2018 newspaper archives of the Andalusia Public Library and read about the businesses, the churches, the residences, the schools, the civic clubs, the recreation, the names of citizens, and the social life of our town. Maybe they will say, “Look how hard those people worked, worshipped, and enjoyed life back then to help make Andalusia what it is today. We should appreciate those who came before us.”