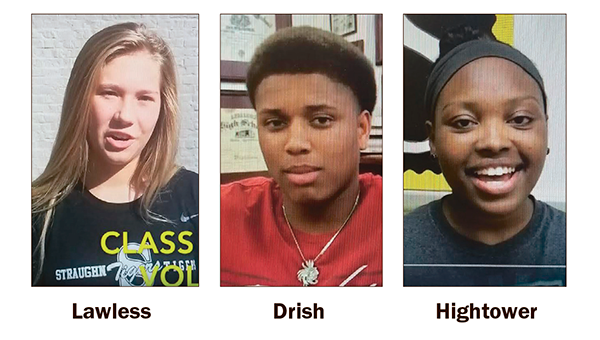 Student-athletes from across the county have teamed up with the Alabama High School Athletic Association to promote participation in team sports.

The #MoreThanAGame campaign started in September of last year and the AHSAA has been building on it month-by-month.

The campaign focuses on creating videos of student-athletes, parents and coaches talking about how there is more to high school sports than Friday night football, tournament basketball and weekend volleyball.

Students are then encouraged by the AHSAA to share their videos via their social media outlets. The videos are also posted on the AHSAA webpage and on Youtube.

Andalusia High School senior R.J. Drish was one of the student-athletes who was chosen to make a video.

“One thing that I learned through sports is to never give up,” Drish said. “I didn’t get to play until my senior year and now I’m trying to play college ball.”

“I played tight-end next to a guy that I wouldn’t have ever talked to if I didn’t play football,” Drish said.

Ariyon Hightower, a senior from Opp High School said that there are a lot of life lessons that she has learned from playing softball.

Hightower is going on to play softball at the next level at Wallace Community College in Dothan.

Straughn High School senior Hannah Lawless has been playing volleyball ever since she could remember and uses the sport to motivate her in her everyday life.

“People have never believed in us,” Lawless said. “Until we went to state last year for volleyball and even then when all the seniors left nobody believed we would be as successful, so I had to step up as a leader. Playing this sport has taught me to step up to the plate and give it my all in life, no matter what people think.”

Lawless is going on to play volleyball in college at the University of Alabama in Huntsville.

According to the AHSAA, there are more than 150,000 students that take part in high school sports.

Ron Ingram at the AHSAA said that Alabama has seen an increase in the numbers of participation in the recent years.

“We are on a slight increase overall, especially in girls’ sports and sports like cross country and track,” Ingram said. “The #MoreThanAGame campaign aims to continue and increase participation.”

The AHSAA encourages student-athletes, coaches, parents and fans to share 30 to 45 second “selfie-style” videos by uploading them at ahsaanow.com/get-connected and tell how high school sports are #MoreThanAGame.

“We are fortunate to have strong participation in high school sports in Alabama,” AHSAA Executive Director Steve Savarese said. “We have wonderful athletic programs in our schools and we know our coaches and administrators work long hours to help teach their student-athletes how to become better young men and women.”