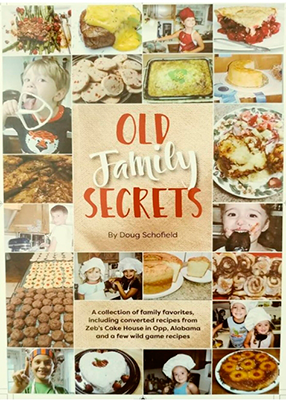 Former Opp resident Doug Schofield hopes to preserve the legacy of his recipes in his new cookbook, “Old Family Secrets.”

Schofield will have a book signing at the Opp Public Library on Mon., April 16, from 10 a.m. to noon.

He now lives in Pike Road, but grew up in Opp, where his father owned Zeb’s Cake House.

“The cookbook is a collection of family favorites,” Schofield said. “Some of the recipes were taken from my dad’s old cake shop.”

Schofield said that he had to work hard to convert the amounts of ingredients to a common household amount.

“When you are making 50 dozen donuts it just makes sense to weigh the flour and measure the eggs by the gallon,” Schofield said. “It’s just not cost effective to make one or two cakes at a time, he made 20 to 50 at a time, so to make it easier on the readers I converted each measurement.”

Schofield said that he had to improvise on some recipes because they were made with commercialized ingredients that do not exist anymore.

“We had to change some things in the recipes because the ingredients aren’t made anymore,” Schofield said. “But my family and I have taste tested everything to make sure that the food tastes just as it did in the past.”

The cookbook will encompass everything from apple pie to beef stew.

“This project started off just as an idea of having something to pass down from generation-to-generation in our family,” Schofield said. “Now it is a cookbook that the readers can share with their families as well.”

Schofield has been working on “Old Family Secrets” for around two years.

“My wife [Frances Mullen] taught home economics for several years,” Schofield said. “She has been a major help in putting all of this together.”

Schofield said that he was looking to sell only 40 to 50 books, just to cover all of the ones he gave to his family, but has now sold more than 400 books.

“This has never been an idea to make money,” Schofield said. “It was just a way to share ideas and preserve a legacy.”

“Old Family Secrets” will be available for purchase during the book signing for $10.