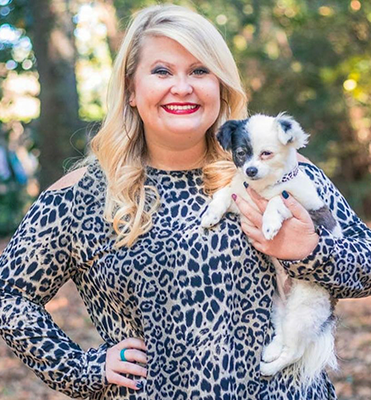 Janna King was more than 40 years younger than the typical ovarian cancer patient when she was diagnosed in 2010. Courtesy photo

When Janna King went to the doctor in 2010, cancer was the last thing on her mind.

“I was having some abdominal bloating and was not feeling well in general,” she said.

She was diagnosed with endometriosis and treated with medication. But she didn’t get better.

She was referred to a gynecologist in Mobile, who immediately sent her to Dr. Michael Finan at the Mitchell Cancer Institute, where she could have a surgical procedure to laparoscopically remove the endometriosis.

The surgery was expected to take three hours, but she was out of surgery in an hour. And she sensed something was wrong when the nurses wouldn’t let her family into the recovery room until the doctor arrived.

“He knew immediately what it was,” King recalled. “He took one ovary, and sent it to the lab. But he told us what it was.”

That’s not the news she was expecting when she woke up from surgery.

“No one had ever said ovarian cancer,” she said. “I had really never heard of it. My first question was, ‘Are you sure?’ ”

And then she asked, “Am I going to die?”

Dr. Finan told her, “Well, you can, but we’re going to do everything we can to make that not happen.”

The American Cancer Society predicts that 22,240 women will receive a new diagnosis of ovarian cancer this year in the United States. About half of the women who are diagnosed are 63 years old or older.

King’s diagnosis was August 8, 2010, and she vividly remembers being surrounded by her parents, Frank and Jan King, and her doctor. She was 22.

“They were all holding my hands,” she said.

“They removed all of the cancer,” she said. It had engulfed her ovaries, was on the exterior of her liver and pancreas, and attached to her uterus. The surgeon also removed a lot of fluid, took a portion of her intestines, and lasered the exterior of the affected organs.

The surgeons also inserted a port so she’d be ready for chemo.

As widespread as the cancer was, it did not show up on the screenings.

“All they saw was the mass on the ovaries,” King said. “That’s why they call ovarian cancer the silent killer. The symptoms are normal women problems – bloating, weight gain but not eating much, fatigue, and confusion.

“Because of my age, and because I was otherwise healthy, and my history was clean, they did not suspect it,” she said. “The doctors said it could have been happening for a year or two. It was perfect that they put me with Dr. Finan when they saw such a large mass of endometriosis.”

Six weeks after her major surgery – with a port in place – chemo began. When her blood work was still questionable, a second port was added. The first put chemotherapy drugs into her bloodstream; the second went directly to her stomach and gastrointestinal system.

“That chemo was so strong, it was administered in two parts, a week apart,” she said.

King was living in Orange Beach when she was diagnosed, and moved home with her parents to recover. The support of this community was unbelievable, she said.

“Immediately, you felt the community lift you up,” she said. “I got tons of mail. People from all over the Southeast were writing me letters when they heard what I was going through. Some of them sent me their stories.

“Even on my bad days, I felt lifted,” she said. “I knew God had me in his hands.

“Jeremiah 29:11 was the verse that comforted me the most,” she said.

It says, “For I know the plans I have for you … plans to prosper and not to harm you, plans to give you hope and a future.”

When her hair started to come out after her first treatment, she shaved her head and wore bows in her crew cut.

“I’m just blessed,” she said this week, as she reflected on the journey. She only skipped one treatment – the last one – because she was so sick.

“The day I rang the bell, I was extremely sick,” she said. “The doctor said, ‘I’m trying to kill the cancer, not trying to kill you,’ and we were done.”

Part of that blessing is that she does not remember the worst days of her journey.

King said the support of her family was a big part of her recovery.

“I couldn’t have made it without my family, and especially my mom,” she said.

She also found comfort in the strong faith of her “Nanie,” Helen King.

Asked what advice she’d give to someone who receives a cancer diagnosis, she said, “Take it one day at the time. Be positive. Pray. And let people help you.

“The way I looked at it was there was always something worse out there,” she recalled. “I would think, ‘I’m here and I feel good,’ so I would try to be an inspiration.”

As she recovered, she was able to continue working in Orange Beach, and later moved to Auburn. Eventually, she found her way back to Andalusia, where she now works as the manager and assistant buyer for Town and Country Boutique.

“For a while, when I would bump into people I hadn’t seen in a while they would say, ‘Oh, I prayed for you,’ ” she said. “This is a wonderful place to live.

“I’m just blessed,” she said. “Blessed is all I can say to describe that. God made me a miracle and continues to use me for his work daily.”