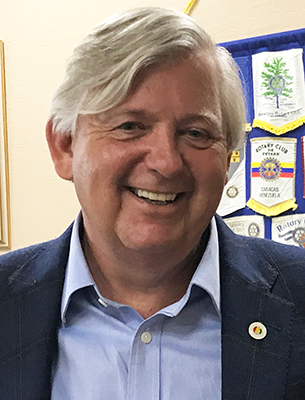 To confront the rising epidemic of opioid use and abuse, three things need to happen, David Darby, Alabama Pharmacy Board president and local pharmacy owner, said.

First, better prescribing habits are needed; second, better dispensing habits could help; and finally, there needs to be a societal shift.

In 2016, the latest year for which data is available, an estimated 64,000 people died from opioid overdoses, the New York Times reported.

Opioids are substances that act on opioid receptors to produce morphine-like effects and are used to treat pain. Typical examples are morphine, hydrocodone, oxycodone and fentanyl. They are known by brand names like Percocet, Oxycontin, Vicodin, Dilaudid, Lortab and Duragesic. The street drug is heroin.

Many of those drugs were developed in the past 20 years, as thinking shifted to “no one should be in pain.”

The drugs are initially prescribed to offset legitimate pain, he said, and an estimated 10 percent get addicted.

When addicts can’t get new prescriptions or refills, they turn to the streets, where prescription opioids sell for $1 per milligram of opioid. A 30 mg tablet has a street value of $30, and a bottle of 100 pills would sell for $3,000.

Heroin, he said, is cheap by comparison. The problem is that dealers are lacing heroin with prescription fentanyl, and users don’t know it until it’s too late.

Tolerance for the drugs increases rapidly, he said, which increases demand.

It’s the highest rate in the United States, with the national average sitting at 82 prescriptions per 100 Medicaid clients, Darby said.

Yet the states with the highest numbers of opioid overdose deaths are West Virginia, Ohio, and New Hampshire, according to the CDC.

“Those aren’t necessarily the states with the highest prescription rates,” Darby told Rotarians Tuesday. “That’s where people are using heroin.”

The “mess” is not just with those who depend upon Medicaid. Darby said that Auburn’s School of Pharmacy petitioned the Board of Pharmacy to put Narcan, the antidote to opioid overdose, at every safety center on the AU campus.

“So for every little blue light you see on campus, there’s narcan sitting beside it,” he said. “It’s scary that there’s that much of a need.”

Both better prescribing habits and better dispensing habits are needed, he said.

“It’s a huge issue,” he said. “That’s where it’s coming from. Any pill on the street came from a pharmacy, and we can prevent that. But doctors could prevent a lot of the prescribing going on.”

Most Andalusia-area doctors don’t write unnecessary opioid prescriptions, he said, and some don’t write any.

Still, he estimates that 16 percent of the prescriptions filled Darby’s Medical Center and Darby’s Village Pharmacy fill locally are for controlled substances – which also included ADHD and anxiety meds. Statewide, the average is about 20 percent, he said.