Rick Pate of Lowndesboro near Montgomery is a Republican candidate for Alabama Commissioner of Agriculture and Industries in the Primaries for both parties on Tues., June 5. He is owns and runs a business based in Montgomery, is a Charolais cattle breeder in Lowndes County and has served as mayor of Lowndesboro for the past 13 years.

Lowndesboro is a small town of 107 population in rural Lowndes County. Similar to the mythical town of Spectre in the movie The Big Fish, Lowndesboro isn’t seen from any major roads though US Highway 80 passes through the town limits. In passing through one sees two occupied buildings, The Highway 80 Café and the BP gas station. But a turn north on CR #29 into Lowndesboro unveils a town unlike any others in Alabama. Antebellum homes, some tremendous and others smaller, line the road. There are no tourist vendors, just home after home from the 1830s to the Civil War.

Mayor Pate says the town is doing fine. It is southwest of Montgomery, and under Pate’s leadership the town has over $1.2 million in cash reserves – a commitment to fiscal conservatism that many in politics could use as a benchmark. The town operates a water system, that despite capital investments in a new well and storage tank, continues to make money. Their water has twice been judged the 2nd best tasting water by AL Rural Water. 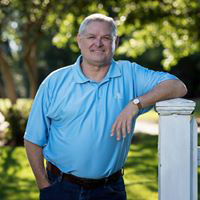 A graduate of Auburn University with an Ornamental Horticulture degree in 1978, Pate has built Pate Landscape Co., Inc., into an award winning, profitable business over 36 years. It currently employs 23 people. The firm has completed projects such as the Bryant-Denny Stadium Expansion in Tuscaloosa, AU School of Nursery & Pharmacy, Wetumpka WindCreek Casino and Hyundai Motor Manufacturing in Montgomery.

Pate has been involved in civic activities, serving on the board of the River Region United Way, president of The Montgomery Rotary Club (2nd oldest Rotary Club in Alabama which counts the governor, state treasurer, Commissioner of Agriculture, and two Supreme Court Justices as members). He also serves on the ALGOP Executive Committee and co-chairs the Lowndes County Republican Party. His family Republican roots go back to 1966 when his mother ran for the Alabama House of Representatives. It is this upbringing, civic and business leadership that has brought Pate to seek an opportunity for service and leadership as the Alabama Commissioner of Agriculture and Industries.

Pate followed in his father’s footsteps in cattle farming. He operates a purebred Charolais breeding operation which currently has 50 registered head of cattle.

His decision to run for Commissioner of Agriculture and Industries as a Republican came after being approached by a local member of Alabama Farmers Federation. Pate decided to research the commitment to serve as Commissioner and after meeting with several industry leaders including current Commissioner John McMillan, Pate felt the time was now to serve the state.

“When I was approached about running for Commissioner of Agriculture and Industries,” Pate said. “I saw it as an opportunity to serve our state and promote the agricultural community that I know from my up-bringing. I take the call to public service seriously, and when I examined it relative to myself, I decided that this office was a fit for me. My life experiences and contacts across the state make me the most qualified candidate running for this office.” Pate said.

“Growing up, we had four chicken houses and I understand the struggles and huge cash outlays my family went through to pay for those houses,” Pate related.” My dad had to carry a rural mail route while also serving in the National Guard as a helicopter pilot for us to be able to farm.”

“I have been generously blessed by Our Lord with a great family, a thriving business and a passion for rural Alabama,” Pate said. “Through hard work, sweat equity and many long days and nights we have built a slice of The American Dream for ourselves, and I want to use the attributes and talents I have to help the people of our state.”

Speaking with Pate for any length of time, his deep knowledge and understanding of agriculture and agribusiness is readily apparent to those who know him best.

“Agriculture and forestry and its related businesses are the backbone of our state, our economy and our shared history,” Pate said. “I see concerns as I travel the state in our rural areas. Agriculture holds so many communities together. Whether it is the amount of debt that our large farmers and poultry producers must take on or the smaller cattle & vegetable producers who must struggle to find a market for their products — it should be a concern to all Alabamians. Consumers are asking for more locally sourced food and we can provide that to them,” Pate said.

“Food Safety is not something we normally must think about, because we have safety measures and standards to create a safe food supply. I want to make sure this continues,” Pate added.

“I understand that the wants and whims of Montgomery and Washington regulators can wreak havoc on a business and on livelihoods,” Pate said. “Thankfully with President Trump in office, and a Southerner, former Governor of Georgia, Sonny Perdue as the Director of The United States Department of Agriculture, they are rolling back many of the onerous and nonsensical rules propagated by The Obama Administration. We will take a hard look at what the department does, and why, and seek to get rid of any baseless, outdated or impractical rules and regulations we find.”

“Another part of leadership,” Pate says, “is the ability to see problems on the horizon before they get to be overwhelming. I understand that, and my thoughts on the future of agriculture and how we will feed our planet are on my mind and a major concern to me. There are not many elected officials talking about this vital issue.”

“It has been said recently that to feed the planet we will need to double our food production in the next 50 years. That is a daunting task that cannot be successful by just working harder. We need to learn how to work smarter,” Pate said. “I am dedicated to helping our farmers and agribusiness people get the tools they need to produce higher yields and longer growing seasons through the application of science. This is an interesting aspect of the job that I believe is under publicized and we shall seek to be on the cutting edge of AgTech if I am elected Commissioner of Agriculture.”

Asked to sum up his reasons for running for Commissioner of Agriculture and Industries, Pate said, “I want to expand markets, ensuring food safety and promote agriculture and industry. That’s the role of government, and if we can do that and get out of the way, we will be successful!”

Pate is running as a Republican. The other Republican candidates for Ag Commissioner are T.O. Crane, Gerald Dial and Cecil Murphy. There are no Democratic candidates running.

The Pate campaign can be found on the internet at www.rickpate.com, on Facebook at facebook.com/rickpateforagcommissioner and via telephone at 334-264-8370.