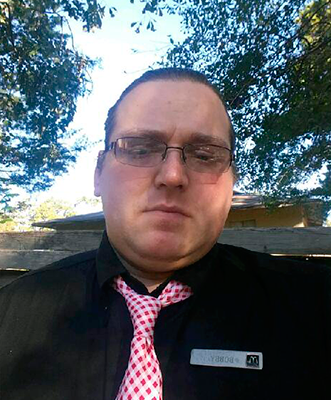 A genetic heart condition has landed Bj Riley in a Birmingham hospital, and his family is seeking help as they plan to care for him.

Riley was a manager of the Andalusia McDonald’s until health issues sidelined him. At 30, he has congestive heart failure.

“In July of 2015, I started having problems,” he said from his hospital room Tuesday night. “I felt like I couldn’t breathe, like something was sitting on my chest.”

He went home from work and told his mom something didn’t feel right.

“We went out to hospital, and they ran some tests on me,” he said. “They said I had a spot on my lungs and sent me to Flowers Hospital in Dothan.”

In Dothan, he was diagnosed with congestive heart failure, a condition in which the heart’s function as a pump is inadequate to meet the body’s needs.

He continued to work until November of 2017, when increasing shortness of breath and fatigue became too much. The same symptoms sent him back to the hospital this week. At UAB on Monday, he had a heart cath, and technicians left tubes in place to continually drain fluids from near his heart. He’s been told he needs to have a mechanical pump, an L-Vad, surgically implanted.

The condition is especially troubling to his family because the Riley siblings lost a brother, Jonathan Carnley, to the same disease at 29. Their father, who lives in Huntsville, is dealing with heart issues, and they also lost a young nephew to heart disease following heart surgery.

Family members said they have limited transportation options, and don’t know how they’ll get their brother home. They’ve been told he’ll need home health assistance when he is released from the hospital.

Since he’s been unable to work, Riley also has not had insurance coverage, and has been told he won’t be eligible for Medicaid until 2020.

“He’s been approved for disability, but can’t get Medicaid,” his sister said.

When he’s able to return to Andalusia, he’ll be at home with his mom, Loretta Grantham, and his sisters caring for him.

“I’m trying to raise some money to help pay my way to the doctor’s appointment and to get my medication and can’t work due to all my medical issues,” he wrote on the page. “Because I’m only 30 I’m so used to paying for my bills and now I’m so stressed out because I don’t have the money to pay any of them.”

Riley also updates his condition on his Facebook page.