SPACE CAMP: AES students get taste of life as astronauts 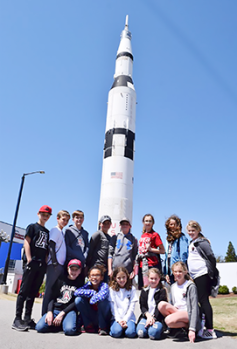 The entire class at the U.S. Space and Rocket Center. 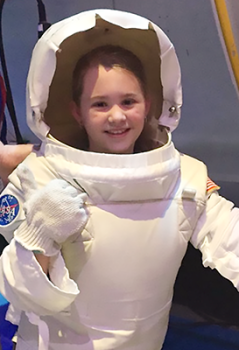 Sadie Carpenter in an astronaut suit. 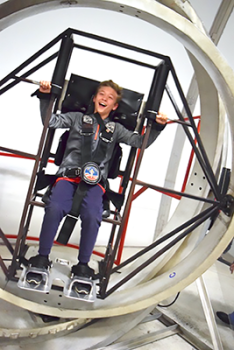 Cade Cassady in the Multi-Axis Trainer.

Andalusia Elementary School teacher Barbara Peek took a group of fifth grade talented and gifted students to the U.S. Space and Rocket Center in Huntsville to learn about teamwork and outer space.

“We talk a lot about teamwork in this class,” Peek said. “And being able to take them to the Space Center and participate in some things they do at space camp was a way for them to incorporate teamwork in the different things they did.”

Peek said that the children were able to go into a simulation of being in outer space.

“The simulation focused a lot on teamwork,” Peek said. “They had no practice before getting in, so they had to work together to be able to do it.”

McKinley Marlow said that her favorite part of the trip was the Space Shot, which is a ride at the Space Center that shoots the riders up and pulls them down quickly so they have the feeling of being in zero gravity.

“My favorite thing was the MAT, which stands for multi-axis trainer,” Mack McIntyre said. “It simulates the disorienting feeling when you are coming back down to earth.”

Caris Dubose said that her favorite part of the trip was the shuttle mission where she was number one flight engineer.

Although the students sounded like they had fun, Jacob Sellers said that he learned that it is not always fun in space, because of the stressful situations.

Kylie Riley said that she learned a lot about what it is like for the astronauts in space and that teamwork is very important during a mission.

“One thing that I wanted the kids to understand is that all of this is happening in Alabama,” Peek said. “We some times forget about some of the things going on here, so it was so important for the students to learn a little about our history.”

The students were able to learn a lot of serious things, but Noble Bell said that they also heard funny stories about space.

“We learned that John Young smuggled a sandwich to space,” Bell said. “But on the way back to Earth, he got nauseous and threw up.”

The students wrote thank you letters yesterday to their parents for letting them go on this adventurous field trip.