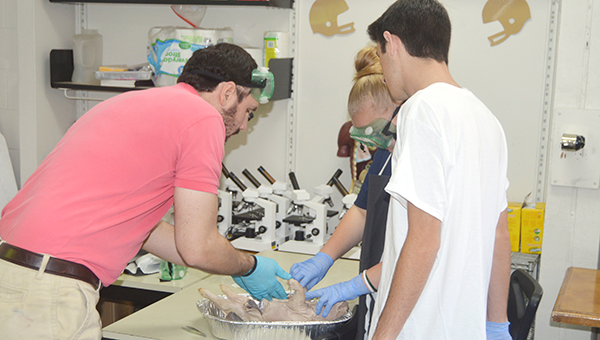 Sterling Driver and Garrett Lester help a student with her pig. 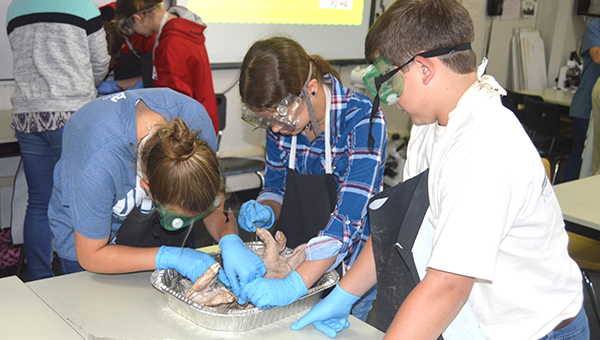 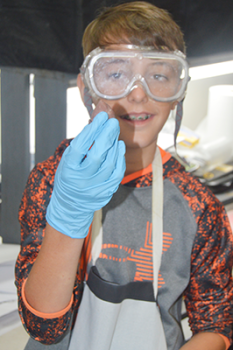 “This class is life science,” Driver said. “So we learn about the different body systems such as the digestive system and the respiratory system. Since the pig is a mammal, the students can connect the pig’s body systems with ours and get to see it hands on.”

This is the fourth year that Driver has presented this project to his students.

OMS seventh grader Kyla Rhodes said that she enjoyed getting to see everything up close.

“I really enjoyed opening the pig up and seeing what was inside,” Rhodes said. “This is my first time doing a dissection so holding the stomach was pretty cool.”

Alyssa Easley, Andrew Danford and Haylei Henagai were all partners in the dissection and called their pig “Piggy” or “Darla.”

“I think pulling out the small intestine was the coolest thing,” Henagai said.

Danford said that his favorite part was pulling out the large intestine.

“We went through the digestive system in class,” Easley said. “So, it was important to really know the systems so we would know what we were cutting into.”

Dylan Williams said that being able to hold the heart was an exciting experience.

Driver brought in a couple of seniors from Opp High School to help with the project.

“I had the seniors come to help because they have been through it before,” Driver said. “And to sort of make a connection between the high school and middle school.”

Senior Garrett Lester said that they do not get to dissect anything at the high school level so it is fun to get to come back.

“Once you get to high school it’s like all the fun things stop happening,” Lester said. “So being able to come back and help the students learn with hands on stuff it’s pretty fun.”

Senior Slancy Stanfield said that she did not pay too much attention the first time she dissected the pigs.