Remember when: It’s fun to share memories of past 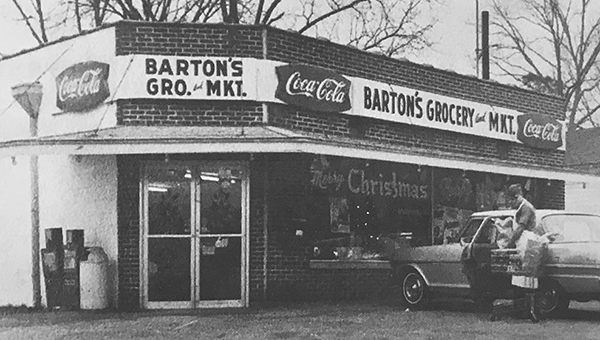 Former residents of the Andalusia area are enjoying so much posting remembrances and photos on Facebook under several sites such as “Growing Up in Andalusia” and others. For those who don’t do FB, let me share some of these posts that some of us can relate to, but younger people may find a little hard to grasp these memories of older times.

Remember when – the “High School Word Book (D. C. Heath & Co. – Boston)” was used? Stephanie Moore Townsend still has her great grandfather’s textbook. Herman Stephens was born in 1897. Written in the inside cover was Route E, Andalusia. Anyone know what part of Covington County he might have lived in?

Remember when – Uncle John’s Grocery was located on the corner of South 3-Notch and Baisden St.? Dr. Bill Hansford remembers it as Jim Faulkenberry’s store. “He kept us going during World War II when groceries were rationed.” Charles Studstill, Sr. replied, “Yes, so true!” Lisa Thompson recalls living on Baisden St. and adds, “Every day after walking home from school, my sis and I had a dime each to spend. That would fill a mini-brown bag with candy. Such happy simple times those were. Giant Sweet Tarts ruled!” Jerry Andrews posted, “Sad that neighborhood stores closed. Some kids now in their 40’s remember Theo Welch’s store on Stanley Ave. and Lindsey Bridge Rd. They saw him cut meat in the back and bought ‘hoop’ cheese there – the good old days!”

Janice Henderson said, “I spent many a nickel or a penny at Uncle John’s. Susan Jones Ashbee posted, “Mom sent me in to buy one can of beer to put in my hair to give it texture when I rolled my hair on orange juice cans!” Charlotte Hawkins stated, “Amazing how many lives are touched by one little store!” Jim Patrick added, “Blast from the past! Yep, my grandparents lived right across the street for I remember Faulkenberry’s and Uncle John’s store run by John Grant Wright.”

Vickie White Cowen posted, “I went to that little store almost every day. Johnny and Georgia Wright at that time helped run the store in later years. Georgia, mother of Wren and Chip, taught me how to cut up a chicken to fry!”

Rachel Smithart Eddins said, “You could take an empty drink bottle in for a soda and candy bar.” Adrian Dyess remembered, “He had the coldest Grapico drinks!”

The pool at Red Level was filled by pumping water from an underground spring. The water was cold, folks remember. Courtesy photo

Remember when – the swimming pool at Red Level had extremely cold water which was pumped in from an underground spring. Emily Albritton Hill, daughter of Ophelia Adams Albritton who grew up in downtown Red Level said, “I jumped in once but never again!” The pool was there when her mother grew up in the 1920s and 1930s.

Remember when – Esther Foster worked for Dr. Juanita McDonald? Marta Fuller Harper states, “She was a sweet nurse and her shots never hurt!” Emma Posey posted, “Mrs. Foster, Ruth Alderman, my mother, Annie Clyde Posey, and Dr. Mac were all a great influence in my becoming a nurse!” Yes, I remember, too, those penicillin shots that looked like viles of Cool Whip, so thick! I got chased all over Dr. Mac’s office when it was located behind Charlie Creech’s Jewelry Store, the building now occupied by Bryant Appraisals. The site of that house, the doctor’s office, is now a parking lot.

Remember when – the L & N Railroad operated a station and railway express agency office in downtown Red Level. However, in 1959, a petition was signed and presented to the Alabama Public Service Commission which asked for the discontinuation of these operations. What a blow to downtown Red Level once a bustling little town!

Remember when – chalk boards (mostly black, some green) were standard in school classrooms? At AHS there was a beloved math teacher we nicknamed (behind his back, of course) “Chalk Dust Norris,” because he erased and dusted his trousers after every mathematical problem he wrote, solved, and taught on his panoramic blackboards! Local Robert Cremer will remember to this day that he had Mr. Norris for a math teacher from the 7th grade through the 12th grade at AHS in General Math, Algebra 1 & 2, Trigonometry, Geometry, Calculus, etc. After graduation, Robert headed to Troy State College where he majored in math. He ended up with “Chalk Dust Norris” as his teacher again for the next four years! Some of those boys used to ride by his house on Sanford Road on Saturday nights late and holler out from the car windows real loud as they cruised by, “Chalk Dust Norris!” Those were the days!

Remember when – you might have been in the AHS Detention Hall of Fame? This was posted by Brian Cross. Richard (Ricky) Daniel (Class of ’64) weighed in “I was even paddled by a female teacher (Bebe Green).” Student Daniel is now an engineer in the Atlanta, Georgia area who has had a lifetime career designing and reworking infrastructure. Guess those paddlings made him finally listen in class! 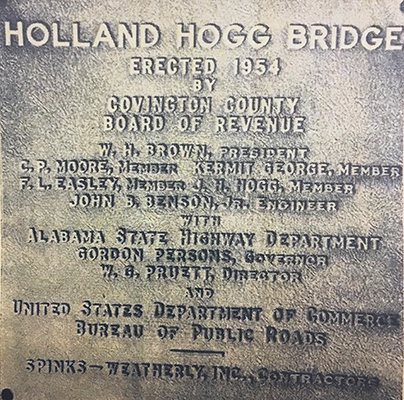 Remember when – Dunn’s Bridge was erected in 1954? The bridge’s correct name is actually the Holland Hogg Bridge according to Pat Rawls Barton, granddaughter of Mr. Hogg, who the structure was dedicated to. A metal plaque on each end of the bridge designating the steel and concrete span was placed when the project was completed. Mr. Hogg was a veteran member of the county governing body, the Covington Board of Revenue. John Benson was the head engineer. He was lauded for designing a bridge with a slight curve. I remember him and his family well, because they were friends of my parents – Eleanor, his wife, and two children, Sissy and Buddy.

Remember when – there was a catalog of Southern Craftsman Furniture. According to Brad Bowman on FB, his grandfather, Harvey Bowman, was one of the craftsmen who used to build furniture for the Banks family. These Victorian designed reproductions are scattered from South Alabama and the east coast to the west coast of Hollywood. Look for pieces in the cowboy movies on TCM – the technicolor newer movies!

There are a few Southern Craftsman pieces housed in the Three Notch Museum. If your family would like to donate others for display, please do so. They are part of our treasured business heritage. Recently some pages from their catalogs have been donated to the museum. I can’t wait to see them in person! I have an old invoice with their letterhead where my parents bought some of their furniture in 1946 when they set up housekeeping after they returned home to Andalusia after WWII. Their furniture shop was on Through Street just off Sanford Road once the armory headquarters and later Plumbing Supply.

Remember when – Dutch and Nell’s was the place to eat outstanding catfish and slaw? Allen Hobbs, Gary Padgett, and Greg Christakos all remembered, “You went on the River Falls to Heath Road and then turned on the dirt road with a fairly steep hill that went down to the restaurant. It was ‘come as you are!’ We ate on a covered screened deck where you could sit and see the water. Bill Baldwin said, “It was out in the boonies!”

Guess I have reminisced enough for this column except – Do you REMEMBER WHEN a portrait of George Washington always hung in the principal’s office and sometimes in the classrooms? Remember now, students, principal is spelled p-r-i-n-c-i-p-a-l. The principal is your “pal!” Also, the cursive letters on those green charts always hung in the 3rd grade classrooms and maybe even in grades above that! We hear through the grapevine that teaching “cursive” writing is being revived. Maybe one day “penmanship” will be, too!

Sue Bass Wilson, AHS Class of ’65, is a local real estate broker and long-time member of the Covington Historical Society. She can be reached at suebwilson47@gmail.com.