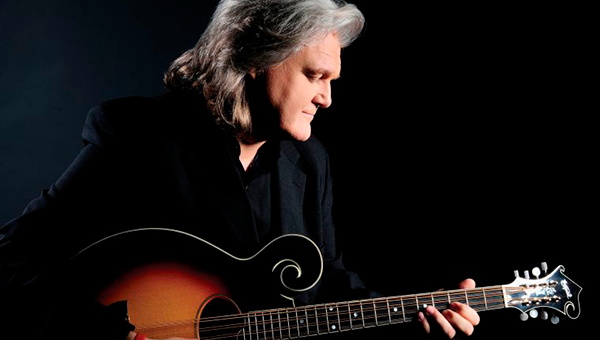 The Country Music Hall of Fame’s recent announcement that it will induct Ricky Skaggs this fall has given the artist pause to put some perspective on his career.

The man who learned to sing harmony with his mom and to play instruments with his dad has enjoyed a successful career on many stages, but still likes to do venues like Andalusia. He and the Kentucky Thunder band will perform at the Covington Center Arena this Saturday, April 21, in a fundraiser for the LBW Community College Foundation.

“I’ve played a couple of shows in Alabama, but I don’t think I’ve ever been to Anda-

lusia,” Skaggs said. “It should be a great show, so I hope a lot of people will come out.”

It’s a busy week. Tuesday, Skaggs performed at the Grand Ole Opry and then was scheduled to travel to Shelby, N.C., Ponte Vedra Beach, Fla. and then to Andalusia.

“We love performing at the Opry,” Skaggs said. “It is a family and a commitment. I don’t perform at the Opry for the financial aspect of it. I do it for the fans. Show dates are what pay the bills, so I am very excited to come to Andalusia.”

“I think it will really hit me in October, which is when the inductee ceremony is,” Skaggs said. “Even though I honestly think when they pull the sheet back on my plaque that fans will think it’s Glen Campbell cause of the hair.”

“My mom was always singing around the house,” Skaggs said. “So I started singing harmony with her and she told my dad.”

Skaggs’ father played in a duo with Skaggs’ uncle in the 1930’s, but a trip to Guam during World War II led to his uncle’s death at an early age.

“He went out to rescue his buddies in Guam and got gunned down,” Skaggs said. “My grandparents received a purple heart for his bravery, and ever since then my dad had an inner vow to buy a mandolin for his own son, and I answered his prayers. I started playing the mandolin with my dad when I was five years old.”

Skaggs looked up to several old country singers while growing up, including Jimmie Rodgers, Bill Monroe and the Stanley Brothers. He was intrigued at how the Beatles and the Rolling Stones had a slight American undertone to their music.

“I would instinctively hear American music,” Skaggs said. “I didn’t know that they were being influenced by Elvis.”

Skaggs recalled one of the first times that he went on the road.

“We were going to watch the Stanley Brothers perform,” Skaggs said. “And for some reason Ralph Stanley was taking forever to come on stage, so me, my buddy Keith and my dad got up and sang for a good 30 minutes before Ralph got there. All the songs we knew were from the Stanley Brothers so for us to play those songs in front of him, it was amazing.”

Skaggs said that after Stanley heard them sing he asked him to go on the road.

“The experience that we had on the road with the Stanley Brothers made us know that we were going to do this for the rest of our lives,” Skaggs said.

After performing in several bands including Boone Creek with Vince Gill and Jerry Douglas, Emmylou Harris’ Hot Band, and The Country Gentlemen, he went on to record his own songs.

After several minutes of the man headbobbing to the music, the man revealed that he was Jim Mazza from Capitol Records, Skaggs said.

“He said that the music I made could get me a record deal,” Skaggs said. “So after a long time of going back and forth and rejection, I was able to record a song for a friend of Jim Mazza’s from CBS Records.”

Skaggs said that he has had a lot of musicians that he respects give him many wonderful words of encouragement and congratulations about being the upcoming induction into the Country Music Hall of Fame.

“It is so overwhelming,” Skaggs said. “But I am just so glad I get to perform for the town of Andalusia and have a little fun.”

Skaggs will have a tent for merchandise, t-shirts and a recent book he wrote called “Kentucky Traveler” for sale.

Skaggs and Kentucky Thunder take the stage at 6 p.m. on April 21 at the Covington Center Arena in Andalusia. Gates open at 4:30 p.m. with local performers.

General admission ticket holders should bring a lawn chair for the outdoor performance. In case of rain, the event will move inside.