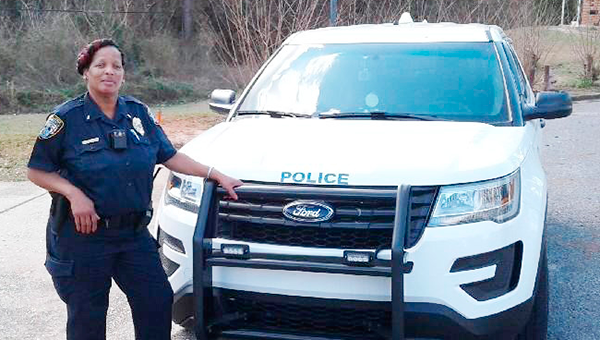 Lt. Alice Donaldson is retiring next week after more than 25 years with the Andalusia Police Department. Courtesy photo

Next week, Lt. Alice Donaldson of the Andalusia Police Department will end a 25-year-plus career she began quite by accident.

“I didn’t actually apply for the job,” she said. “I applied for a different position that I know now I couldn’t have done. They called me back in and asked if I would be a police officer. I needed a job with benefits, so I went from there to the Police Academy.”

Now, when she reflects on that sequence of events, she looks up, gives a nod, and says, “It was supposed to be.”

“I love it. I love my job,” she said. “I fought to make it. I am the first black female lieutenant, and I’m about to make it out the door in full retirement.”

When the opportunity with APD opened for Donaldson, she had just finished 11 years in the military.

“I’ve always been hard,” she said. “I was a strong person. But I always believed in being fair. I treat everybody the same, and I tried to stay in my lane. I don’t get caught in stuff going on around me.”

Donaldson said she always took time with people and tried to treat them with respect.

“My guys, we are tight,” she said. “I’ve been doing it so long, I think they look at me as a mom. I treat them all the same, and we have rules we follow. They’ve got my back and I’ve got theirs. They are my other family.”

She has high praise for Chief Paul Hudson.

“This chief has been really good to me,” she said. “He opened the door for me to be able to get my lieutenant stripes. I’m really grateful for that.”

As she worked for APD, Donaldson also served in the National Guard for 22 years, retiring in 2012. She was only activated once, when she went to Iraq for a year in 2010.

As a female officer, she said, you have to work twice as hard.

Asked what advice she’d give someone beginning a career in law enforcement, she said, “Be fair. Always be fair. Show respect to the person, and he will give you respect back.

“When I showed up at a scene, people came straight to me. They knew I never lied to them or tried to trick them to get information,” she said. “Now sometimes, I had to lock them up, but they knew that.

“Now, I see people I’ve locked up and they say, ‘Thank you, Mrs. Alice,’ ” she said. “Some of them know if they were on drugs, getting locked up saved them.”

The opioid epidemic is real, she said, and it’s real right here in Andalusia.

“We see a lot of it because we’re the first responders,” she said. “People who are high on it are just out of control, seeing stuff, and fighting at things that aren’t there. If you think it doesn’t happen in Andalusia, oh yes it does.”

Donaldson’s husband, James Donaldson, is retiring this week, and the two plan to travel.

“We’ll stay as long as we want to, because we’re not on anybody’s schedule.”

She also loves to cook, and enjoys feeding friends and family. Donaldson has one son, Durrell Rawls, Jr.

“I just give glory to God for this journey,” she said.

She will be honored with a reception at the Shaw Recreation Center from 2 until 3:30 p.m. on Fri., April 27.