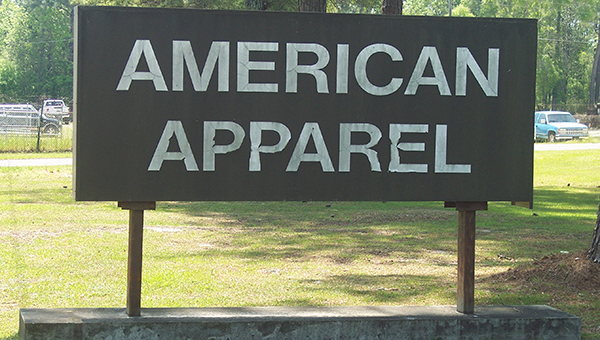 The Opp Area Chamber of Commerce will recognize American Apparel as its business of the year at the annual banquet in May.

American Apparel is a privately held company founded in 1987. It has become known as one of the premier producers of combat and utility uniforms for the United States Military. American Apparel operates facilities located in Selma, Centre, and Opp, employing almost 750 people.

The company opened the Opp facility in 2002, manufacturing the Marine Corps Combat Utility uniform trouser. For the next 11 years, the Opp facility produced trousers for the United States Army, Air Force, Navy, as well as the Marines. When the Department of Defense spending was reduced and troops returned from the war in Iraq, the requirements of uniforms declined tremendously forcing the closure of the Opp plant in 2013. With the turmoil that was created throughout the clothing and textile industrial base, the management of American Apparel found a way through the novation of a Marine trouser contract in 2014 as an avenue to re-open the facility in Opp. Through the resilience of the general manager, Peggy Henderson, and her management team, the facility reopened with 67 people in March of 2014, and today employs more than 230 employees.

In 2015, American Apparel was awarded the Gold Star Superior Supplier award by the Defense Logistics Agency located in Fort Belvoir, Va., and the Silver Star Award in 2016. In November of 2017, American Apparel was awarded a five-year contract for the Marine Corp utility uniform. Receiving this contract was a big step in maintaining the workforce at the Opp trouser facility. The plant is currently producing the Navy Work Uniform Type III trouser, an Improved Flame Resistant Coverall, as well as the new contract for Marine Corp Trouser. Hopefully, with the new administration in Washington, the defense spending budget will be maintained at a level that ensures the military is supported with all its required soldier equipment and uniforms.

Chuck Lambert, chief operating officer for American Apparel, stated, “The employees of the plant in Opp, exemplify the attitude and effort it takes to be successful not only in business but in life as well.”