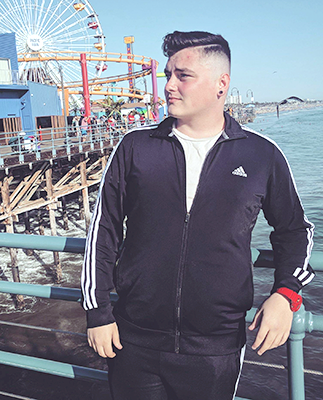 Storm Bumgarner went from scanning groceries at Wal-Mart to making beats for rappers in Los Angeles all within a span of two months.

Bumgarner was on social media when a man reached out to him wanting to hear his music.

“I thought it was just some guy wanting to buy a beat I produced,” Bumgarner said. “Next thing I know he is showing the music to his boss at his label.”

Bumgarner said that after he signed that the label had already booked a show in L.A. and the label wanted him to tag along so they could showcase their new signee.

“I got a couple of buddies to come with me and we chose to drive there to save money,” Bumgarner said. “We all pitched in for gas and I just took everything in on the drive.”

From Thursday, April 12, to Monday, April 16, Bumgarner was finally living his dream in L.A.

“Honestly I couldn’t express my excitement,” Bumgarner said. “I get to help other artists out and now artists are coming to me asking to collaborate and that’s honestly all I have ever wanted to do.”

Since Bumgarner was 14, he has been making music trying to make his music dream a reality.

“I was working at Wal-Mart as a day job,” Bumgarner said. “And I loved the people there and the job, but I wanted to do something I was passionate about, and that is make music.”

While in L.A., Bumgarner was able to play music at a small venue called The Spot.

“It was exhilarating,” Bumgarner said. “Between that and actually walking on Hollywood Boulevard, I was having the time of my life.”

Bumgarner’s musical roots are in electronic dance music, but the label he signed with is more focused on hip-hop and R&B.

“I think I got into the right type of music,” Bumgarner said. “Even though it’s not what I’m used to, in this day and age, hip-hop has taken over so I think I’ll focus on that.”

Bumgarner graduated from Opp High School in 2015 and went to Lurleen B. Wallace Community College before signing with Lyrical Innovations.

“I have been trying so long to make this happen,” Bumgarner said. “So it feels great to be able to work with a legitimate business.”

Bumgarner now works from home on his laptop producing music, but eventually wants to move to California to keep working on his dream of making music.