Castille: Much to be learned from football 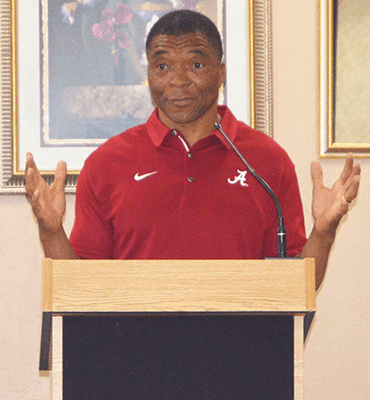 Castille, an ordained minister who has served as chaplain for the Crimson Tide football team since 2001, also runs a foundation that uses football to teach life lessons to young people. Monday, he talked to local Kiwanis Club members about that work, and plans to hold a local football camp this summer.

“I was a freshman in college and got called to Coach Bryant’s office,” Castille said. “I was scared of course, but when I got in there he said that he saw something in me. He believed that God gifted people with talent and he could see that in me.”

Castille said that it is important for leaders to tell young people that they believe in them.

“I believe there is something special about our young people,” Castille said. “We need to take the time to make sure the next generation is believed in, because who else is going to do it?”

Castille’s lengthy football career began at Alabama, where he played from 1979-1982. He was drafted to the National Football League in 1983 by the Tampa Bay Buccaneers , where he played for four years. Castille then went on to play two years with the Denver Broncos.

“I love football,” Castille said. “I love it so much, that I use it as a vehicle to share God’s love.”

Castille was ordained as a minister at The Church at Brook Hills in 1999.

Castille now has six children, three boys and three girls, all of whom followed his footsteps and attended the University of Alabama.

“Character is the most important thing that we need to instill in our young people,” Castille said. “We need to start talking to them about character very early on so they can start hearing it. I use Coach Bryan’s coaching as a philosophy in my life. I always hold things to a high expectation and I believe that is how you can overcome the lows in your life.”

Last year, Castille brought the Castille Character Camp to Andalusia and had more than 200 students participate.

The Character Camp’s goal is to train, develop and prepare players to reach their full potential athletically and personally through skill training and character building. The camp brings in former NFL players, University of Alabama players and Auburn University players to assist with coaching.

“The experiences that these students can have through the camp can change their life,” Castille said. “It can teach them more than just the game of football.”

Castille used his advantage of playing football to obtain a degree so he could give back to his community.

“I did want to go to school to play football,” Castille said. “But I wanted to get my degree so I could come back home and make a difference.”

Castille now has the chance to change the lives of thousands of kids a year by holding the Character Camp.

The camp is free for any student wanting to attend.

The Covington County Children’s Policy Council sponsors the event and asks for any donations from the community.

Registration forms are available from the CCCPC. For more information, call 334-881-2319.