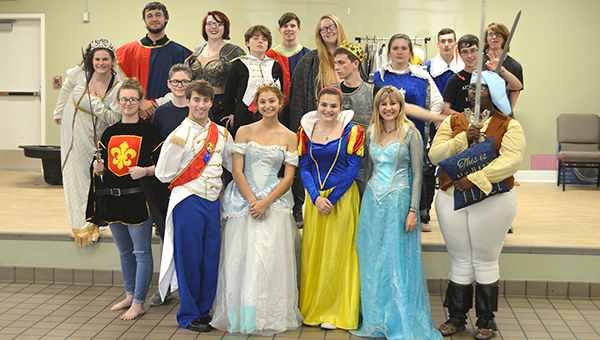 The Andalusia High School Theater Department is presenting its annual Dinner and a Show this week.

Game of Tiaras is this year’s show. It follows the life of an aging king who decides to split his empire among his three daughters, Cinderella, Belle and the Snow Queen. Combining the gut wrenching plot twists of Game of Thrones and the despair of Shakespearean tragedy, this play has an eerie resemblance to Shakespeare’s King Lear.

The group of actors performing are all seniors except for Greyson French.

“The students were the ones who picked this play,” theater teacher Cavelle Jones said. “It is a very dark humored play but the students have done an amazing job with it.”

Jones said that this play allows the group to use special props.

“We have a lot of real swords that the kids get to use and things like that and I think that is important,” Jones said. “We also get to showcase more of the girls this year, which is great.”

This is senior Ryan Palmer’s third year being in the theater department.

“It has been a really great experience,” Palmer said. “The year before last, I was the main character so it has been fun playing some leading roles.”

After high school, Palmer plans to work at Palmer and Sons Collision Center.

AHS senior Joy Ritter has enjoyed her time in the theater department.

“It has been amazing,” Ritter said. “We get to do a lot of things in the community like the Valentine’s singing grams and the Storybook Festival. I am really excited to perform for my family and for them to see all the hard work we have put into the show.”

Ritter will enroll in Auburn University to major in marketing and political science to become a campaign manager after high school.

AHS senior Maggie Anderson moved away from Andalusia for eight years but has been taking theater training so she is glad to be in the club.

“It has been a good experience,” Anderson said. “I love acting so being able to do that with all my friends is awesome.”

Anderson plans on attending Lurleen B. Wallace Community College after high school to obtain her degree in ultrasound technology. She was also awarded a scholarship to be in the LBW Ensemble.

The play will be held at the Adult Activity Center at 7 p.m. but tickets are only available for family and friends.