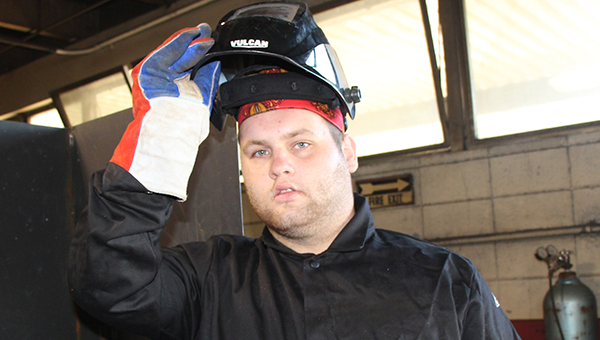 Zachery Smith, 19, of Samson challenges others to keep trying, not give up. Courtesy photo

So often, people who face challenges in life find it too difficult to keep fighting to reach their dreams. That is not the case for Zachery Smith, 19, of Samson, who defied the odds from birth.

“I was born with Autism. My doctor said I would never walk and never take care of myself. I was determined to prove him wrong,” he said.

“I got my driver’s license, I played football, and am a reserve deputy.”

Armed with a strong faith, his message to those who think of turning to drugs or suicide is to never give up.

“It’s time for people to know, there’s no way to go but up. Turn to God and He’ll take care of everything.”

Since the age of 11, he said faith became the foundation of his strength and carries him through many of life’s obstacles.

Daily challenges for him include difficulty focusing on tasks and communicating with a speech impediment.

“I try to make Autism fun and not a battle. It’s a war with everyday life because it kicks up and I can’t focus when it happens.”

To help calm himself and regain his concentration, he turns to a hand-held video game.

“It gives me time to think and then I can go back,” he said.

Although he does not like big crowds, he easily talks to individuals.

“I have a speech impediment, but it’s never held me back. It is sometimes hard to talk to people who might not understand me.”

During high school, he played football and twice attended the University of Alabama’s football camp.

“My senior year, I had an opportunity to walk-on at Troy University, but I tore my knee the last game of the year.”

The first summer after high school graduation, he enrolled in college welding courses, and hopes to follow in the footsteps of both grandfathers, he said.

“Both my grandfathers welded. One worked as a mechanic and the other owned a small business.”

He soon discovered college is much different than high school, he said. College-level career technical training requires students to meet industry-specific standards before completing the program and in order to work in the field.

“I have to meet the standards” to achieve a college credential, he said.

As he continues to work toward achieving his goal, his hope is to inspire others to keep going, no matter the obstacles in life.

“The only limit you have is the one you put on yourself.”

Decision fueled by company’s feud with NRA Yeti Coolers, a favorite brand among outdoor enthusiasts, has cut some ties with... read more