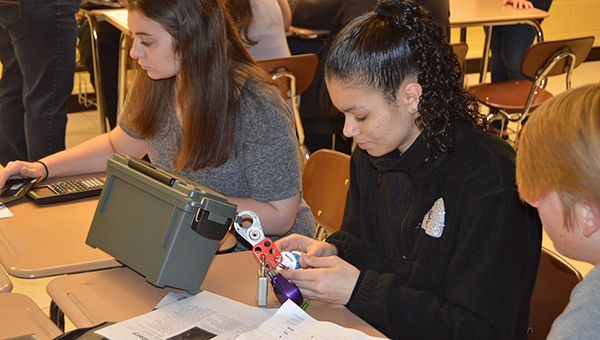 Seanna Riley trying to get one of the locks on her escape box open.

Thanks to the Covington Electric Bright Ideas Grant, Red Level High School students are searching for clues and solving problems to unlock their history and math lessons.

After attending Technology In Motion, a teacher’s workshop held by the Alabama Science, Math and Technology Initiative, math teacher Keron Kyzar thought about bringing one of the things she saw back to Red Level with her.

“We met with a representative from Tuscaloosa,” Kyzar said. “He had all of these things set up in his room and we had no clue what they were. When we found out, it hit me that I could bring this back to the classroom and it be beneficial for all of my students.”

Kyzar’s bright idea was to bring an escape box sponsored by Breakout EDU. Students of all ages are challenged to open the locked Breakout EDU box using critical thinking, communication, collaboration and creativity.

“It teaches the four ‘C’s that we have talked about in class before,” Kyzar said. “So that is why it jumped out to me.”

Students have to look around the classroom for clues and artifacts that will help provide information needed to figure out the combinations to the locks on the box. They have to remove all the locks from the Breakout EDU box before the timer runs out to complete the game.

The Breakout EDU software is compatible with all areas of study including history, English, math and even physical education.

“It goes across the board,” Kyzar said. “I teach math, but I wanted to include history in this box so it combines the two.”

The students came into class with a message on the board with a story and clues on how to get in their box.

“We make it fun by adding a little backstory about why they are getting in the box,” Kyzar said. “The story we did today was that you are with your class on a field trip to the White House and the tour is going really well! So far, you’ve learned that the White House was burnt by the British in the 1800’s and that Franklin Roosevelt was president during WWII. The guide walks through the White House until you are standing outside the Oval Office. She reaches out to open the door and suddenly everything starts spinning. When it finally stops the entire room had changed. There is static on the radio and then suddenly you hear, ‘Yesterday, December 7th, 1941—a date which will live in infamy—the United States of America was suddenly and deliberately attacked.’

‘Oh No,’ says the tour guide. ‘It happened again. We have been sent back to the beginning of WWII. There is only one way to get back and it is to open the time portal in that box. Unfortunately, we only have 45 minutes until the portal closes and we are stuck here forever.’”

Kyzar said that the back-stories add a little fun to the group project.

The group that finished the project first said that the math was the hardest thing about the project.

“If you don’t read everything they give you carefully then you might get a number wrong and you can’t get in the box,” Morgan Ard said.

One of the main things that the project teaches is that teamwork is essential.

“Things are a lot easier when you have people helping you,” Kaitlyn Griggs said. “I think we were first to finish the project because we worked together and read carefully.”

Meanwhile, Covington Electric encourages teachers with creative ideas to apply for their grants.

“We encourage all teachers that have a creative idea to come and apply,” Patty Seay of Covington Electric said. “We are excited to offer this grant to the teachers and schools we serve.”