In a week on the road, soup was best find 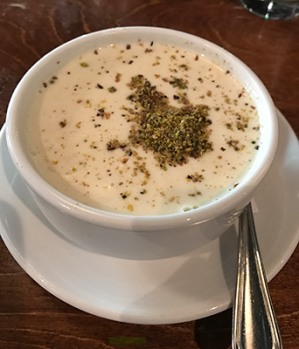 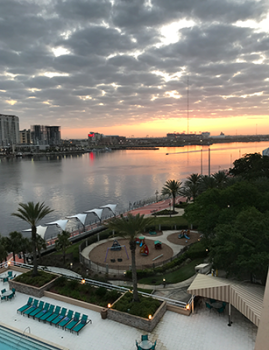 Sunrise on the St. Johns River in Jacksonville. 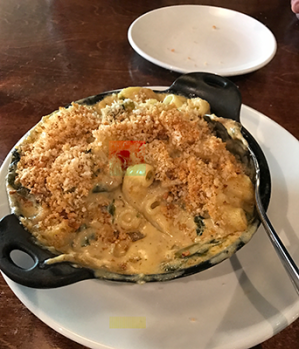 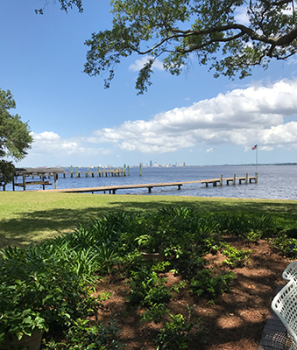 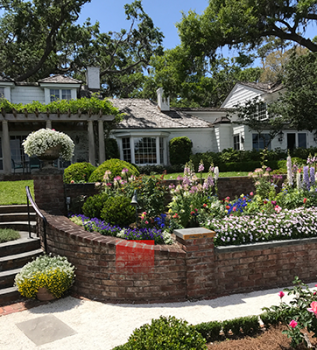 We have spent a week on the road driving towards Jacksonville, Florida, for a Southern Garden and History Society meeting. We only joined this organization two years ago and missed last year’s meeting in Lexington, Kentucky.

We spent the night in Birmingham but much to my sadness we were there on a Sunday night and none of Frank Stitt’s restaurants were open. We had a gyro from Arby’s. (It wasn’t half bad.) After a few days working in Wilmington we moved on to Savannah for a one night stay. I love Savannah but never seem to have enough time there. We chose the Eliza Thompson House for our B&B but we were not really impressed with this choice. Our room was in the lower level (English basement) and not nicely decorated, but they did have wine and cheese between 5-7 p.m. and there was dessert after 8 p.m.; we enjoyed the wine on the patio, but we did not do the dessert. Breakfast was decent but began at 8 a.m., so late for us. Grits and artichoke frittata and a biscuit were the main food items and they were done well, but this place was just not very good value.

Our dinner in Savannah was at the Ole Pink House, an old restaurant, rather dated and very noisy and we were not hungry. On our way to Savannah we had stopped at Graze, a restaurant in Mt. Pleasant, South Carolina, (right outside Charleston) and pigged out on the pulled pork, collards, mac and cheese. (More about Graze later.) At the Ole Pink House we did have she crab soup, and two seared scallops on spinach. None of it really outstanding. You can skip this restaurant, there are better I am sure in Savannah.

Now Graze is a wonderful restaurant! I have talked about it before on a visit to Charleston. Their menu is so creative. We started with a cauliflower and green apple soup plus a Tuscan bean soup with truffle oil, then had their famous pulled pork with collards and mac and cheese (to die for); then being the big eaters we are we also had a soft shell crab sandwich (which we shared) but way too much food. I came home and did a cauliflower soup with green apple. Recipe below. I left my driving glasses at the restaurant and I called and they sent them immediately so I was grateful and impressed with their kindness as well as their food.

The Garden History conference in Jacksonville, Florida, was very good. The highlight was a visit to Glen Saint Mary Nursery. The nursery was started in 1882 by George Lindley Taber and it is still family run. Lin (GLT III) is 80. His son, Tab (GLTIV) runs the nursery and there is a George Lindley Taber V. The family was charming as they welcomed us into the nursery and their homes. Dinner was a barbeque spread on the porch of their Victorian home. We loved sitting in the porch rockers with our drinks before dinner.

Those of you who garden may recognize the Taber name. The Glen Saint Mary Nursery developed a new azalea and named this after the recently deceased George Lindley Taber in 1929. The Tabers were kind enough to give all of us a rooted cutting of their azalea. I have potted them up and they are growing fantastically fast right now. They will take pride of place in the garden next year.

The meeting itself took place in a hotel on the St. John’s River. We had a lovely view off our balcony of the river, the centerpiece of Jacksonville. Of note, Jacksonville is the largest city in the continental U.S. in land area. We all know of the Spanish settlement in St. Augustine in 1565 but there was a French Hugenot settlement at Jacksonville on the St. John’s River in 1564! known as Fort Caroline. When the Spanish arrived they drove the French out.

Jacksonville flourished at the end of the 19th century as a winter resort. Railroads spurred this growth and citrus became important.

We had a chance to visit several private gardens in the area. All were on the St. John’s River—the place to have your home and garden if you can afford it.

Since all the food at the meeting was just so-so, I would say the green apple and cauliflower soup was my takeaway from this trip. Easy to do and tasty and a little different from just plain cauliflower soup.

Heat the oil in a heavy bottomed saucepan.

Fry the onion until soft.

Stir and cook for a few minutes.

Bring to a boil and then turn the heat down to simmer.

Simmer gently for about 25 minutes before transferring to a blender.

Keep some of the mixture back if you want a chunkier soup.

Return to the pan to reheat.

Serve in four bowls and garnish with the toasted pistachios on top.