Remember when: Oh, the places it’s been! 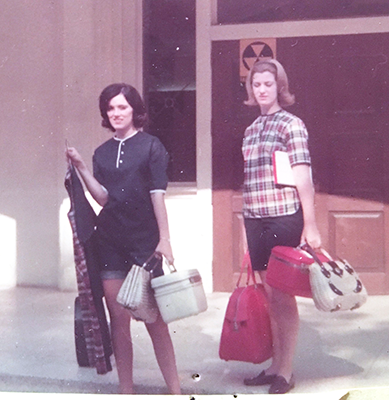 AHS graduates Connie Zeanah and Sue Bass Wilson on the steps of Martha Parham Residence Hall at he University of Alabama, 1965. Courtesy photo

AHS graduation for me and my classmates was not so awfully long ago. It seems that just the other day, we were skateboarding down the steep sidewalk to the new band room below the new auditorium completed in December 1963 or early 1964. There was a host of parties thrown in April and May of 1965 to celebrate the end of our high school careers which concluded the end of May 1965 – soft drink afternoon parties; dinner parties; teas where the girls wore dresses, hats, and gloves; river swimming and boating parties at Point A; and beach weekend bonanzas where those fashionable two-piece bathing suits were modeled on the white sands of P.C. “We’ll Sing in the Sunshine” was our unofficial class song as the girls wore madras, culottes, and Bass weejuns. The boys made a fashion statement sporting those Oxford cloth button-down collar shirts.

A stylish matched set of American Tourister luggage, red in color, was gifted to me for graduation from aunts and uncles, parents and grandparents. As Peter, Paul, and Mary later sang in the early 1970s, “All my bags are packed, I’m ready to go…” And ready to go, I was. The number of days left to leave home was marked off the calendar one by one. The week after high school graduation, my freshman roommate Connie Zeanah and I stood on the steps of Martha Parham Residence Hall at the University of Alabama that summer of ’65 with a few pieces of that red luggage. Her mom, Helen Zeanah, took the photo. She was probably silently thinking, “They have a lot to learn, a long way to go!” She was right since a few weeks before, we had gone up to the campus for orientation and left the sheets we had brought on our beds – never to be recovered!

Last week, 53 years after that luggage came into my possession, I finally was able to complete something on my “bucket list” of “to-dos!” The College of Human Environmental Sciences, Department of Clothing, Textiles, and Interior Design, agreed to accept my donation of this set of luggage for the Carolyn Thomas Stewart Costume Collection. I had once seen a display of “vintage” wedding dresses at the Union building that made me wonder if I might have anything to contribute one day to some sort of collection.

This coming summer (2018) there will be a special student created showing of “historic artifacts” from the 1960s on display at the Gorgas House on the quad. This will include “Bear” Bryant memorabilia with some Arrow shirts made at the Alatex. John Scherf, son of J. G. Scherf, was noted for taking the coach a dozen shirts made right here in Andalusia to the bowl games every year. He knew his size! OMG, I must fit into that “historic” category now! As the country music song goes, “I’m too young to be this ________ old!”

My editor suggested that a REMEMBER WHEN column be written about “Where This Luggage Has Traveled.” I quickly told her that this would probably be boring to many readers, but here goes!

For approximately 35 years from 1965 to 2000, this luggage served me well. It was in 2000 that I made my first trip to Great Britain, so it became practical at that time to purchase some of that “rolling” luggage with the handles. From then on, the American Tourister set was housed in our attic archives!

Here is the rough itinerary probably not in the exact date order of travel:

Andalusia to Tuscaloosa to the Capstone to enter college.

Tuscaloosa to Lake Martin for a summer weekend jaunt with “roomie” CZ to visit family friends.

T-town to “Million Dollar Band” trips to Knoxville and Gatlinburg (U of T); to Death Valley in Clemson; to Nashville (Vanderbilt); to Atlanta and Athens (U of GA); to Jackson (Ole Miss); to Mobile (S. Miss.); to Dallas (Cotton Bowl); to New Orleans (Sugar Bowl); to Miami (Orange Bowl); to Huntsville (Spring Concert).(Before we boarded the buses, Director Col. Carlton K. Butler always gave us band students a brown envelope with meal spending money!)

Later my luggage accompanied me to college friends’ weddings including Morganton, North Carolina (Cox band couple) and Uriah, Alaama, where band friend Freida Luker married an army lieutenant Russell Stadelman. A U of A graduate in education, Freida quickly joined the Red Cross and followed him to Vietnam. She sent me pictures and letters describing what she had gotten herself into saying “If my mother only knew…!” We didn’t see them until we went to “Bear’s” last game in Memphis 13 years later when we stayed at their home in Germantown, Tennessee. By then we had two children each!

Honeymoon – well, there wasn’t one! It was back to Tuscaloosa to finish up!

Talladega – Great Aunt Eva Brunson Purefoy insisted we spend a weekend with her and the other great aunts. We were newlyweds and got to sleep in her 4-poster antique bed straight from the famous Purefoy Hotel she once operated for a number of years. Now, picture this, she slept in the adjoining nursery room of the historic Jemison House she had purchased after retiring from the hotel business. We were quiet as mice! Remember, “Sister” Purefoy was the oldest of the 12 Brunson children reared in downtown Andalusia in the Brunson (City) Hotel on South Cotton Street, the present-day location of Alan Cotton’s Flower and Gift Shop. She knew all about cooking, entertaining, catering in a grand way – all in the Southern tradition.

On other family trips, I was off to Rome, Georgia; Decherd, Watertown, Liberty, Dowelltown, and Lebanon, Tennessee, looking for “family skeletons” and visiting cemeteries locating, photographing, and writing down epitaphs from the resting places of my “greats” and “great greats!” Later our little family visited Opryland! They will never forget that July 4th, one of those 100 degree days, when I was standing over a great-great’s grave, and they were in the air-conditioned truck thinking, “Is this a vacation?”

Traveling to Palm Beach, Florida with my parents was especially memorable when we visited one of my daddy’s first cousins who gave me the 100+ year old Bass Family Bible. Daddy was the youngest male child of the youngest Bass brothers of Georgia.

Pleasure trips with the red luggage lost in time but not in memory include a Bahama cruise; Tulsa, Oklahoma, and Tampa, Florida, to visit a sister’s family; St. Simons Island, Georgia, to visit an aunt’s family; and back to Tuscaloosa to reunite with my ADPi sorority sisters.

Unbelievable but it’s true, my red luggage took us to Auburn to live for three years. After a time, we returned to “home sweet home.”

A Pilot Club convention to Calloway Gardens was unforgettable, especially with my interesting and never dull roommate Irene Davis Butler who was also my traveling companion and roommate on a trip to Branson, Missouri. She told everyone on the bus, “My roommate watches C N & N on TV all night!” Why, of course, I was raised during the Cuban missile crisis and still to this day need to be ready when the bomb is launched!

My luggage also bulged with belongings when I went to visit my U of A Sophomore roommate, Emily Graham, in Montgomery who got us all signed up for all of the festivities of the Gov. Don Siegelman Inauguration. I will never forget the Alabama State University Chorus lined up on the winding staircase in the capitol building and singing a capella, “Come Thou Fount of Every Blessing.”

One of the most exciting places my luggage took me to was Chester County, Pennsylvania, by way of Philadelphia where French cuisine is superb. A Betsy Ross doll and a miniature Liberty Bell were souvenirs for my children tucked in my luggage on the return trip.

The annual Philips family reunion featured a tour of the ancestral home of John and Mary Philips, immigrants from Wales, and an evening at Longwood Gardens where I was elated to get to hear a choral concert by the Fred Waring Singers. Many Fred Waring songbooks (S.S.A. & S.A.T.B.) have always been used by music educators in high school glee clubs and choral music classes. By the way, the Basses and the Philips married up when their families migrated down south and over from North Carolina to mid-Tennessee as they forded creeks and streams in those tar-wheel carts! They were probably singing all the way, “She’ll Be Comin’ Round the Mountain When She Comes!”

Happy graduation to all of you upcoming high school graduates. “Happy trails to you” wherever your new luggage takes you in the future! Pack your bags and get ready to set out on the world to make your dreams come true! One day, you’ll REMEMBER WHEN, too!