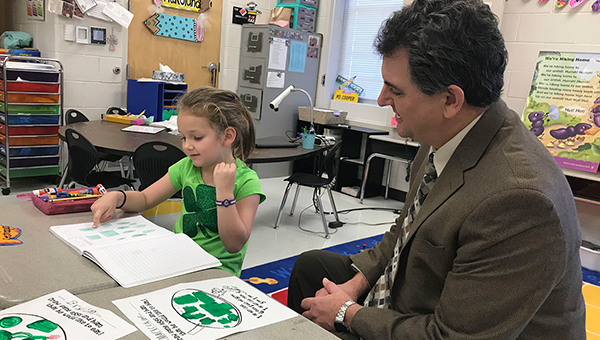 Fleeta Junior High School and Andalusia Elementary School are among the schools receiving funding for additional Pre-K classrooms this fall.

Gov. Kay Ivey and the Alabama Department of Early Childhood Education announced on Monday that the state’s First Class Pre-L program will add 107 classrooms in 33 counties this fall.

This will be the first year that Fleeta will have a Pre-K program.

“We have been getting a big push from the parents to have a Pre-K program,” Principal Seth Richardson said. “So we decided to apply and see what would happen.”

Fleeta will begin by having one classroom with an 18 student limit.

“I think it is a great thing to get an early start,” Richardson said. “Having Pre-K will allow a jump-start for all of the kids coming into kindergarten.”

This announcement came one week after Alabama First Class Pre-K was recognized by the National Institute for Early Education Research for having the highest-quality, state-funded voluntary pre-k program in the nation. “First Class Pre-K is a nationally-recognized program of excellence,” said Jeana Ross, Secretary of Early Childhood Education. “The program framework encompasses all aspects of the highest quality early learning experiences that ensure school readiness for children, and this emphasis on quality impacts student outcomes far beyond kindergarten.”

Already, Covington County Schools have Pre-K classes at Straughn, Red Level, and W.S. Harlan. Richardson said that he looks forward to being a part of Alabama’s First Class Pre-K.

“We are honored to be a part of First Class,” Richardson said. “Alabama’s standards in Pre-K are very high and I honestly believe that our kids here at Fleeta need to have every opportunity as every one else.”

Andalusia Elementary School also will add an additional classroom. Sonja Hines, district administrator for Andalusia City Schools, said that the system has two classrooms already. After filling the slots for t hose classes next year, there are more than 70 kids on the waiting list to get in to the Pre-K program in the fall.

“This opens up so many possibilities,” Hines said. “All kids should have an opportunity to be in an in-school environment early on. It can help excel a kid, or get them caught up.”

With this new classroom, it will open up two teaching spots at AES.

“Soon we will open up two teaching positions for a lead teacher and an auxiliary teacher,” Hines said. “This is just the beginning, we should see more people around the area getting more and more classrooms.”

This year the Alabama Legislature approved an $18.5 million expansion for First Class Pre-K, increasing the 2019 program budget to $96 million.

This is the program’s largest ever single-year increase. In addition to funding new classrooms throughout the state, the Department of Early Childhood Education will continue to ensure pay parity for all First Class Pre-K teachers with the same two and a half percent cost of living raise as K-12 public school teachers in the upcoming school year.

The new classrooms will expand access to Alabama’s high-quality, voluntary pre-kindergarten program to 18,864 children in the 2018-2019 school year, with more than 1,040 classrooms in all 67 counties that will serve 32 percent of eligible four-year-olds statewide.

Opp also has Pre-K classes. All three school systems use a lottery to determine which applicants are selected for the Pre-K slots.