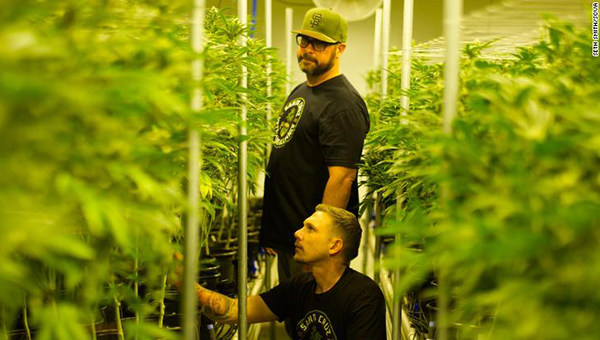 Andalusia native Jason Sweatt hopes national publicity his business and outreach received this weekend with help further his mission of helping veterans avoid the dangers of opioids by making medicinal marijuana available to them.

“I had used cannabis a little bit my senior year in high school, but I had no interaction the 10 years I was in the military,” he said in an interview Monday.

Sweatt planned to make a career of the Army.

He received an honorable discharged in 2006 after two years in Iraq and was working toward completing his undergraduate degree in Hawaii. But the transition from military to civilian life was difficult.

“When I got out of the service, something was missing,” he said. “I was 29 years old, sitting in class with 18- and 21-year-olds who hadn’t done anything. I started having issues with what happened in Iraq, so I went to the VA and got help.”

That was in 2007. The Veterans Administration prescribed opioids and mood stabilizers. Sweatt knew that could prove problematic for him because his father died as a result of opioid addiction, a journey that began after he was injured in a car accident in Buck Creek Curve.

“He whittled away from a 220-pound man to a 120-pound man,” Sweatt said. “The opioids basically ate all of his stomach up and his organs basically shut down. It was like legal heroin.”

As Sweatt struggled to deal with the aftermath of Iraq and the side effects of the drugs prescribed by the VA, a friend said, “Hey, man. Why don’t you try this?”

“Suddenly, I could be in a large group again without the side effects of opioids. I could still be cognitive,” he said.

He started to grow a few plants in his apartment.

Later, he moved to California when his girlfriend got a job in the Bay area. Sweatt started working in a business that sold gardening supplies and cultivating for himself.

“I started to think, ‘Maybe I should give back.’ ”

Many of the vets he knew were on Social Security and couldn’t afford marijuana.

“I would give them a little bit every month,” he said.

It was through a non-profit farming coalition for veterans that Sweatt met Newsom, who would become his business partner. The coalition’s director was interested in what Sweatt was doing with marijuana for vets, but receives federal funding, so he couldn’t endorse it.

“The next thing you know, Aaron and I were attending an eco farm conference together,” he said.

They drove to the conference together, and brainstormed what became their business. SCVA is licensed in California to cultivate, manufacture, wholesale, and retail cannabis, and both men have served on boards setting policies governing the industry.

In California, cannabis is legal for both medical and recreational adult use.

“IF you are over age 21, you can walk into the store and buy it,” Sweatt said. “With medical marijuana, you still have to go to a doctor to receive a recommendation for medicinal cannabis.

SCVA reserves 10 percent of its products for veterans.

“We have a meeting for about an hour once a month,” he said. “We work with other veterans service providers in the area.”

The monthly meetings provide information, camaraderie with other vets, and if the veteran has a doctor’s recommendation, a free voucher for the SCVA retail store.

Veterans disproportionately struggle with mental problems and chronic pain, studies show, and an average of 20 a day commit suicide.

“We’re kind of like the VFW of cannabis,” Sweatt said. “Like the old AmVets club of Gantt.”

Veterans who qualify can receive about 10 grams of flower per month, he explained.

At the first meeting SCVA hosted, they had a dozen veterans participate. Two months later, it had grown to 45, and now averages more than 200 per month. The participants range from those who, like Sweatt, served in Iraq, to a 90-something-year-old World War II vet, he said.

“One guy had been on Percocets for 20 years,” Sweatt said. “He no longer uses the prescription. He told me, ‘This is great.’ ”

The business partners have been interviewed by industry publications, and were featured in Time magazine earlier this year. CNN’s interview is the biggest so far.

“We decided to be transparent,” Sweatt said of the media attention SCVA has received. “We have a position that needs to be pushed, by however many means necessary. We’ve gotten good feedback.”

The American Legion, a group representing 2.4 million U.S. military veterans, has called on Congress to remove marijuana from Schedule 1 of the federal Controlled Substances Act and “reclassify it in a category that, at a minimum will recognize cannabis as a drug with potential medical value.”

Sweatt believes that will happen before the year is out.

Meanwhile, Kentucky, Tennessee and Arkansas recently has adapted policies to allow farmers there to cultivate hemp, which is considered a class of marijuana, he said.

“This is where CBD oil is cultivated from,” he explained. “It only has a minimal trace of THC.”

THC, or tetrahydrocannabinol, is the chemical compound in cannabis responsible for the euphoric high users receive from cannabis.

He thinks of the fertile soils of Alabama, and wonders if hemp could become a profitable crop here.

“Other developed nations are moving along with it, too,” he said. “We’ll keep pushing for veterans’ rights.”

Sweatt is the son of Tawanna Wright of Gantt.