Teen-popular Juul not a problem in local schools yet 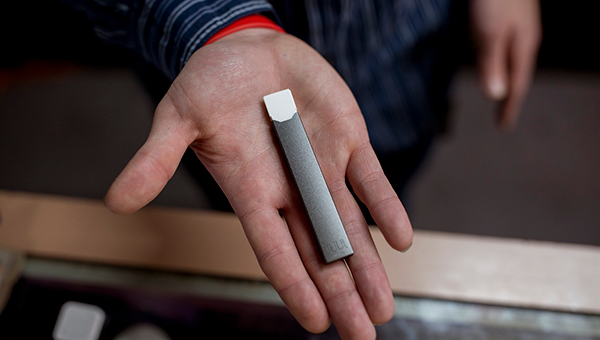 The new trend in high schools is a flash-drive lookalike e-cigarette that has local administrators on the edge of their seats to quickly shut it down.

The Juul is a small, sleek device that students can easily conceal in their palms. It resembles a flash-drive, but instead of computer files, this device stores nicotine.

“We are just now starting to see this problem,” Andalusia High School principal Dr. Daniel Shakespeare said. “We haven’t had much opportunity to catch kids, but we know it is a growing problem.”

The Juul attempts to mimic the nicotine hit of a real cigarette, and Nielsen reported Juul had achieved a 46.8 percent market share, exceeding the top market share achieved by Marlboro cigarettes.

On the Juul website, it says that each pod is equal to 200 cigarette puffs, which is like smoking a pack of cigarettes a day.

Opp City Schools Superintendent Michael Smithart said that the main thing they are starting to do is give an education on the item to the students.

“We want to make sure that they know that it isn’t safe,” Smithart said. “I mean they are still taking in nicotine, no matter what cartridge you get it from.”

Like other forms of vaping, the Juul offers enticing flavors such as crème brulee and mango, increasing their appeal to kids.

“We have procedures set up and we will deal with it when it becomes a massive problem,” Smithart said.

Since the Juul device is sleek and resembles a flash-drive, it is easily concealed, making it hard for teachers to notice when students are actually “juuling.”

Shakespeare said that he has dealt with two students on the bus that had the device and one who was vaping in P.E.

“I suspect that a lot of the students will be doing it in parking lots and restrooms, away from teachers,” Smithart said. “But we are going to be extra vigilant and supervise what is going on.”

One of the only factors keeping Juuls away from kids is that they do not come cheap. At the Kangaroo express gas station, starter kits are available for as much as $40 dollars, which includes a USB charger, a warranty and a four-pack of the flavored Juulpods, and lately, Bobby Spurlin, an employee at the Kangaroo, said that the number of teens coming to buy them has increased.

Spurlin said that they have several ways of checking I.D.’s to make sure that they do not sell to underage kids.

“Our motto is ‘I.D. I.D. I.D.,’ we also double check birthdays and don’t accept paper I.D.’s because they are too easy to manipulate,” Spurlin said.

Shakespeare said that even though they are just now starting to see this trend, it is just another thing kids come up with.

“Kids always come up with things to keep us on our toes,” Shakespeare said. “We will deal with it in the best way possible when it does become a problem.”