Wilson of WAAO and Ray appear to be using hand signals to discuss placement of the PA system. 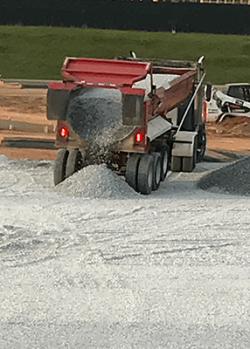 Crews are working to finish the new surface of the field.

Andalusia head football coach Trent Taylor joined members of the Andalusia Board of Education in Municipal Stadium Tuesday for an update on AHS construction projects.

“I look out at it and think, ‘Please don’t rain,’ ” Taylor said, when asked about the daily progress he sees in the project. “I’m sorry for the farmers, but I really hope we go 90 days without rain. A major drought.”

With Andalusia’s first home game slated in the new stadium on August 31, Brian Ray of Wyatt Sasser Construction, who is managing the project, estimated Tuesday the project is 20 to 25 percent done.

“If we don’t have major hiccups,” Ray said, “We’ll have the field house complete by July 13. The plaza will be done by August 10, with both the ticket booth and concessions. The press box will be October 17, and the auditorium will be in November.”

Fencing at the stadium is schedule for July 17, he said, and guard rails and hand rails will be in place by July 12.

“If we can make all of that happen, we can play ball here,” he said.

To make that happen, crews are often working 14 hour days, he said. And there has been someone working in the stadium every Saturday since the construction began. Even as board members wandered through the stadium and auditorium, crews were working on the surface on which artificial turf will be installed.

Ray and other employees of Wyatt Sasser Construction answered questions for board members and the media, and posed a few of their own. Yet to be finalized are the size and style of the scoreboard. Ray said the sound system engineers need the dimensions to determine the size of speakers for the scoreboard.

And the board questioned why there are were no water spickets installed on the sidelines. Ray said the engineering designs did not call for water on the sidelines, but said it’s not too late to remedy that.