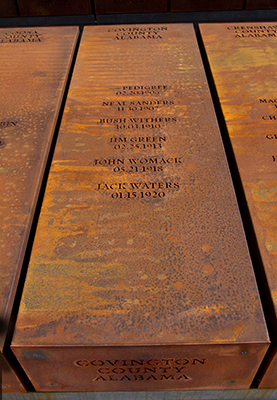 The National Memorial for Peace and Justice that opened last week in Montgomery holds a grim cloister of 800 weathered steel columns hanging from the roof.

Etched on each column is the name of an American county and the names of people who were lynched there.

When visitors to the museum first walk in, the columns are at eye level, but as visitors walk, the floor descends and by the end, the columns are dangling above just as the lynching victims, leaving the visitors in the position of the spectators that performed the heinous crimes. Lynching is the act of putting someone to death, especially by hanging, by mob action and without legal authority.

On Covington County’s column there are five names carved into the steel. These are their stories.

The first of the names etched on the column is of an African American who was known as “Pedigree.” The Andalusia Times reported on Wed., Feb. 21, 1906, that a “lecherous black brute” entered the home of J.T. Bray, on Pleasant Hill, during the gentlemen’s absence, and repeatedly assaulted his wife, who was alone with her little children.

As soon as the alarm was given, the sheriff with a posse of determined men, “whose hot southern blood was at fever heat,” were out in search for the man and finally found him and took him to Mrs. Bray to establish his identity. When his captors started taking the man to jail, the man realized that proof of his guilt was conclusive, so he made a break for liberty when he was fired upon and killed. The Times then reported that this case should be a warning to other lustful members of his race.

The second lynching was loud enough that The New York Times reported on it.

Neal Sanders, a young African American was shot to death in Opp after Mrs. Ellis, a farmer’s wife, said that he allegedly stopped her and Miss Sorrell, a 14 year-old girl, with a shotgun as they were returning home. Apparently the girl escaped, but Mrs. Ellis was attacked. Sorrell gave the alarm and a posse was formed. They captured Sanders at 4 p.m. and put 300 shots in the man’s body.

Afterward a rope was tied around his neck, attached to a buggy and was dragged through the streets of Opp and through the African American settlement of the town.

The sheriff was notified of the crime, but arrived too late to prevent the lynching.

The third documented lynching was conducted in a “quiet and orderly manner,” as a mob tied Bush Withers to a stake and burned him alive, according to a report from the Ozark Tribune on Oct. 8, 1910.

Warden J.L. Long had heard rumors of a mob and tried to take the convict to jail, but was intercepted on the outskirts of the village, where Withers was tied to a stake, shot and buried. The Tribune reported that up until the time of the assault he had been regarded as a faithful employee at the lumber camp, and served as water boy for the other convicts.

The fourth documented lynching victim held the same fate as Sanders, with 300 bullets in his body.

The Troy Messenger reported in March 5, 1913, that Sam Spicer Jr., “a prominent citizen and an extensive planter of Covington County,” administered a flogging to Jim Green, an African American farmer tenant.

The Messenger then reported that Green went into the rear of Spicer’s home, near Heath, with a shotgun and probably mortally wounded Mrs. Spicer, who was preparing the evening meal. Then the “black assassin” dropped his gun immediately after firing and fled to the woods, where he was soon over-taken by citizens and shot to death.

The next lynching was of an innocent African American by the name of John Womack.

The Andalusia Star reported on June 7, 1918, that the Honorable A. B. Powell, a cashier of the First Bank of Red Level, said that certain facts about the African American who was lynched was innocent of the crime for which he paid the penalty.

According to a report by the Phenix-Girard Journal on May 23, 1918, Womack was riddled with bullets and left in a swamp by a posse of 100 white men.

Womack was accused of making indecent proposals to a 15 year-old white girl and then choked her, but according to Powell, those accusations were false.

This final victim was “shot to pieces,” according to a report by the Choctow Advocate on Jan. 21, 1920.

Jack Waters was an ex soldier who saw duty in France. The Southern Star reported on Jan. 21 1920, that Waters raped a woman by the name of Mrs. Haines. News of the outrage spread rapidly throughout the people of Florala and a posse started searching for Waters.

When the group found him they took him to the square with several automobile headlights turned on him and ordered him to run. He was only able to take a few steps before the mob shot him to pieces.

Jim Green and Neal Sander’s stories were the only two documented in the Andalusia Times.

According to the Equal Justice Initiative, more than 4,400 African American men, women and children were hanged, burned alive, shot, drowned and beaten to death by white mobs between 1877 and 1950. EJI founder Bryan Stevenson has said he believes there were thousands more victims whose stories were not documented.

The museum also pays tribute to the legacy of enslaved black people, racial segregation and Jim Crow, and with contemporary presumptions of guilt.