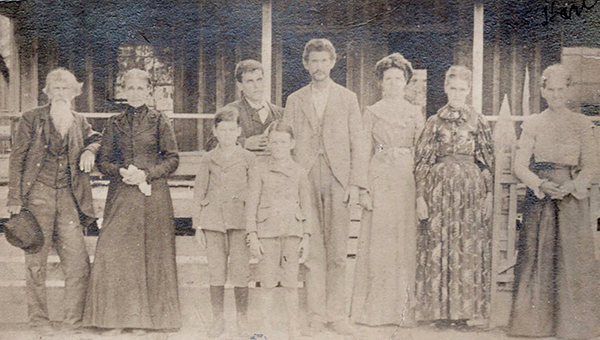 A relative and good friend, Marie Pruitt Pierce, shared a picture of special interest, which prompted today’s story. The folks in the photo include members of the Barrow, Caton, Dixon, Jay and Stokes families. They also include three generations of relatives. Members of these families were early settlers with there being a number of intermarriages.

The first person on the left in the picture is John Julius Barrow who was born in 1839 in Andalusia. He was the son of John Grey Barrow (1801-1859) and Gatsy Ann (Dunn) Gainer (1790-1867). John Grey is remembered as one of the early pioneers in the Montezuma settlement where he operated a ferry service across the Conecuh River. He married the widow, Gatsy (Dunn) Gainer, a resident of Pensacola, Fla.

John Julius Barrow grew up in Covington County, and when he was about 23 years of age in 1862, he enlisted for service in the Confederate Army at Milton, Fla. He was assigned as a private in Company G, 1st Florida Regiment. Following the end of the war, he was paroled at Milton in April 1865. He returned home and was soon married to a young lady believed to be Mary Still.

This writer was unable to clearly distinguish between John Julius’s two wives and their children. It appears that he was first married to a lady named Mary, possibly with the surname of Still or Steele ?. He was definitely married later to a widow, Elizabeth (Dixon) Caton, wife of Samuel Caton (1831-1865). It appears that most or all of John Julius’s children were by this second wife. In the 1880 census of Covington County, John Julius was 41 and Elizabeth, 43; with the following children in the household: Marion Caton, 19; Minnie, 10; Lula B., 8; John H., 6; and David Samuel, 2.

Now back to the photo, the second person beside John Julius is his wife, Elizabeth (Dixon) Caton. Elizabeth was the daughter of John Bonaparte Dixon (1804-1873) and Serena Liles (1809-1872). She was the second wife of John Julian Barrow and the widow of Samuel Caton, son of John Dent Caton (1787-1858) and Sarah Euphamia Robinson (1798-1880). Elizabeth and Samuel Caton had a few children, including Olivia “Olive,” before his death during the War Between The States in 1863.

Next to Elizabeth Barrow are three young men. The oldest (standing in rear) is Thomas Jefferson “Tom” Jay, son of William Marion Jay (1835-1937) and Joan Norris (1845-1925), who would later marry Addie Bedonia Stokes who is also in the picture. The two younger men, Pearley and Max Stokes, are younger brothers of Addie Bedonia and sons of Matthew Wright Stokes.

Standing next to Addie Bedonia (Stokes) Jay in the picture is her mother, Olivia “Olive” Elizabeth (Caton) Stokes, who was born in 1857 as the daughter of Samuel Caton (1831-1863) and Elizabeth Dixon (1835-1911). It is believed the last person in the picture, standing next to Olive may be her sister, Mary or Marion Caton. (Anyone who might know the identity of this lady for certain is requested to contact this writer.)

Sources used for identifying the people in the picture and the related genealogy included the following: Ancestry.com and personal family records of Mildred Pruitt Pierce, Gloria Jay Palmer, Stephen Caton and Curtis Thomasson.

Anyone who may find an error in the above history or identifications of the people in the picture is requested to contact this writer, Curtis Thomasson, at 20357 Blake Pruitt Road, Andalusia, AL 36420; 334-804-1442; or Email: cthomasson@centurytel.net.