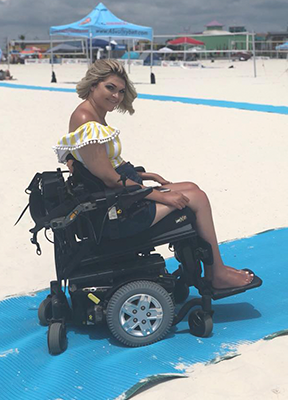 Chelsea Huggins negotiates the sugar white beaches of Gulf Shores without assistance, thanks to the installation of new beach mats. Courtesy photo

Thanks to Gulf Shores’ easily accessible handicap mats Chelsea Huggins was able to go to the beach without assistance for the first time in eight years.

“I’ve been to the beach numerous times over the past years, but since my injury I’ve not been able to go onto the beach without assistance,” Huggins said.

When Huggins was 18, she was a passenger in a Jeep that left the roadway and left her badly injured. The accident left Huggins paralyzed from the chest down and she had to spend four months at the Shepherd Center in Atlanta.

“I am grateful Alabama made the decision to place an access mat on our beach,” Huggins said. “They make it easier for individuals to walk on the beach, transport coolers, push strollers and for those of us like myself to be able to go onto the beach independently.”

The mats are five feet wide, made of plastic and held in place with 12-inch stakes. It stretches from the walkway at the West end of Gulf Shores’ public beach across the sand, 200 feet closer to the Gulf of Mexico.

“I think it is an incredible asset that will be useful for everyone,” Huggins said. “It’s a prime example of universal accessibility. I most certainly will visit Gulf Shores’ more frequently now that I know I can independently access the beach.”

Although the accident left Huggins paralyzed, she does not let it hold her down. She creates masterpieces in an interesting way – painting by mouth.

“I highly doubt I will paint on the beach, though, simply due to the high winds and sand,” Huggins said. “I feel as though it would be an epic fail.”

Huggins has already informed some of her friends who use wheelchairs of the access mat.

“I have already told several friends that have the same problem and I will continue to do so,” Huggins said. “The inconvenient hassles associated with the inaccessibility at the beach have resulted in many individuals completely avoiding the beach. So I am certain that Gulf Shores will have a lot more business from those of us with disabilities now that they have incorporated inclusion for us.”

Huggins believes that everyone deserves to go onto the beach independently.

The city of Gulf Shores is considering placing several more access mats along the beachfront for its disabled beach goers.

Huggins is a student at Troy University, and intends to graduate with her bachelor’s in psychology in May of 2019. Afterwards, she plans to apply to Troy’s graduate program, majoring in rehabilitation.