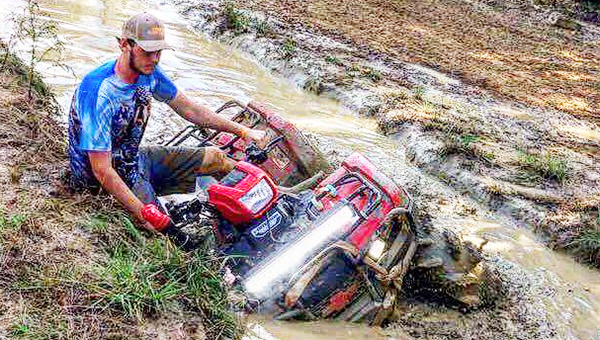 Dustin Davis is shown enjoying the mud on an accident-free day. Saturday’s ride didn’t turn out that way. Courtesy photo

Dustin Davis was on another routine expedition at Boggs and Boulders Saturday, when disaster struck, leading to an air ambulance trip and 42 staples in his scalp.

“The accident was just that, an accident,” Davis said. “It is something we have done a hundred times before and this time it just went horribly wrong.”

Davis said that he was riding with a friend and hit a washout on one of the trails. It threw his friend off and gave him serious road rash. Davis was not as lucky.

“He had some pretty serious road rash,” Davis said. “I got pinned under the four-wheeler as it skid to a stop. My head was stuck under it and it actually wore the skin down to my skull.”

The main thing Davis was worried about was if his friend was OK.

“My friends finally got me out from under the four-wheeler, then I was able to check on him and make sure we were both OK,” Davis said. “This happens so often that we never think anything of it, especially me, because besides a little road rash, that’s all that happens. So we hop up and keep going.”

Davis, who was still hospitalized Monday, said does not remember when the ambulance got to him, all he knows is that he was terrified.

“I don’t remember when they got there,” Davis said. “But they put me on a back board and kept me from moving. It was terrifying not being able to look around and nobody would tell me how bad it really was. If it wasn’t for my friends, I don’t know what I would’ve done.”

Eventually, Davis was air lifted to Baptist South in Montgomery where they put 42 staples in his head.

“As far as preventing it, there is really nothing either of us could’ve done,” Davis said. “Except wearing the proper riding attire, but Boggs to me is all about being comfortable and having fun.”

Davis said that a helmet could have prevented his injuries but it is something he would have never guessed would happen.

“The one thing I would tell everyone that’s going out there this summer is just to pay attention and be careful,” Davis said. “It was just one of those freak accidents that happen. I’m just glad we are both all right and will be able to continue to go after our injuries are healed.”

Boggs and Boulders requires its attendees to sign a release and waiver of liability, and assumption of risk and indemnity agreement that says the attendee assumes full responsibility for any risk of bodily injury, death or property damage.