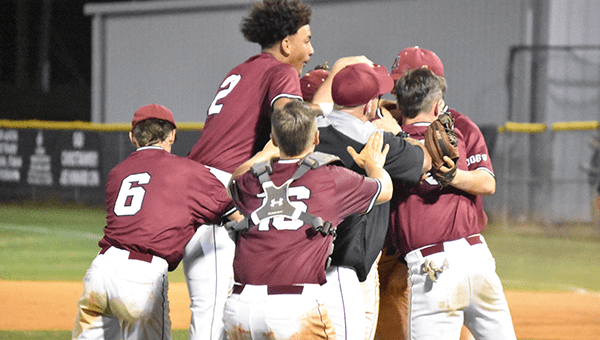 The Bulldogs celebrate after winning the second game.

The Andalusia Bulldogs are heading to the Class 4A state championship after sweeping the Bibb County Choctaws on Thursday night in Centreville.

In the opening game of the series the Bulldogs rallied late to pick up a 5-2 victory.

The Bulldogs went down in order to start the game.

In the bottom of the first inning, a single and two walks loaded the bases for the Choctaws with no outs.

Jacob Cravey the next batter to hit a line-drive out to Will Clark at first base. After snagging the ball, Clark stepped on the bag for a double play.

The Choctaws then took advantage of an error to take a 2-0 lead.

Cravey and the Choctaws’ starting pitcher then dueled it out for the next innings.

In the top of the sixth inning, Gill Morgan singled to start the frame.

Ethan Wilson followed with a single and then Garrett Davis loaded the bases when he reached on an infield single.

Hogan Nichols followed with a sacrifice fly to give the Bulldogs’ their first run of the game.

Sebaskin Stallworth then came up with a single that scored Wilson to tie the game.

Cravey kept the Choctaws off of the board in the bottom of the sixth to send the game tied into the final frame.

In the top of the seventh inning, Cravey got things started with a one-out single and moved to third on a double from G. Morgan.

Instead of pitching to Wilson with the go-ahead run on third, the Choctaws elected for an intentional walk.

With the bases loaded, Davis drew a walk to put Andalusia up 3-2.

Nichols followed with another sacrifice fly and another hit from Stallworth gave the Bulldogs a 5-2 lead.

Cravey held off the Choctaws in the final frame to pick up the 5-2 win.

In the final game of the series, the Bulldogs held off the Choctaws for a 9-8 win to advance to the state title game.

Wilson got the start on the mound for the Bulldogs and struck out two batters on the way to a 1-2-3 first inning.

Leading off the bottom of the first inning, Wilson put the first pitch he saw over the fence in right field to give Andalusia a 1-0 lead.

Wilson then struck out the side in the top of the second inning. 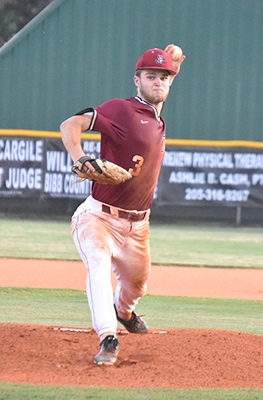 Ethan Wilson was lights out on the mound.

Morgan drew a one-out walk to start things for the Bulldogs in the bottom of the third and moved to second when Wilson was intentionally walked.

After G. Morgan was thrown out, a throwing error allowed Wilson to come around to score.

Nichols then came through with an RBI single to put Andalusia on top 3-0.

In the bottom of the fifth inning, Nichols drove in another run with a double to give the Bulldogs a 5-0 lead.

The Choctaws then got a pair of runs in the top of the sixth inning to cut the score to 5-2.

In the bottom of the sixth inning, Davis came up with bases loaded and cleared the ducks off the pond with a triple and then a single from Nichols put Andalusia up 9-2.

Morgan ran into trouble in the top of the sixth inning as the Choctaws made a impressive comeback attempt and cut the score to 9-8 with tying run on third base with two outs.

Andalusia head coach Tyler Dent went to the mound for a pitching change, and it appeared that Chip Morgan was going to come on in relief. Wilson came sprinting in from his spot in center field, pounding his chest and calling for the ball.

Since he hadn’t reached his pitch limit, Wilson took his spot on the mound.

Wilson got the next batter to hit a high chopper to right side of the mound. Wilson made an acrobatic throw to first for the final of the game.

“You can’t describe it, there is no feeling like it,” Wilson said after making it past the fourth round for the first time in three tries this year. “Losing three times in fourth round is the worst feeling in the world, but this makes up for it.”

Dent said he was very proud of the way his team played. 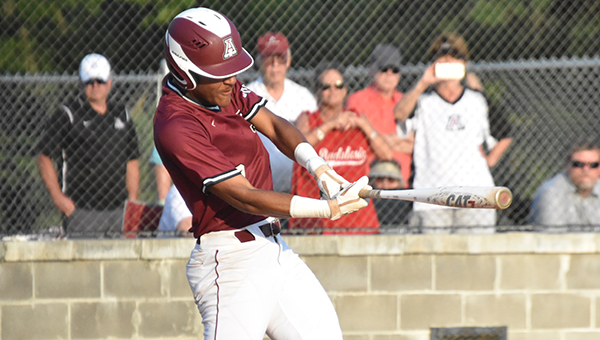 Sebaskin Stallworth picks up a base hit.

“First of all, that first game was one of the most gutsy performances I’ve ever had from a baseball team in my six years of being a head coach,” Dent said. “Go down early and all the momentum was sucked out of us. We come back in the sixth and kept going. Cravey settled in after the first inning and gave us a chance to win the rest of the ball game. I was proud of the way we continued to play. In the last game, we are up seven runs going into the last inning, but as everybody knows, those last three outs are the hardest to get. To be honest with you, when I go out there for the pitching change and see Ethan (Wilson) running in, it hadn’t even crossed my mind. You can’t argue with him wanting to get that last out and then he makes a heck of a play on the mound to win it for us. Garrett Davis got a huge bases loaded triple in the sixth inning and that turned out to be really big.”

The Bulldogs will advance to the state championship on Tuesday at Paterson Field in Montgomery.

Andalusia will take on the winner between Oneonta and Hokes Bluff. The two teams split Thursday night and will meet again at 5 p.m. Fri., May 11.