Jones gets appointment to West Point 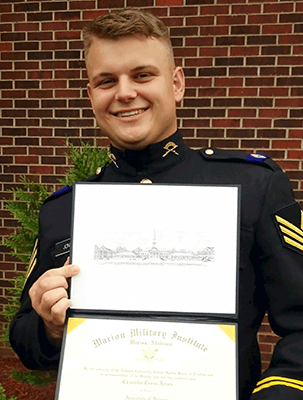 After three years of dedication and hard work, Chandler Jones has been appointed to the United States Military Academy at West Point.

“It has been a long two years, but it feels great,” Jones said. “I am super excited and I know this was all worth it.”

Jones started applying to West Point when he was a senior in high school. He received appointments from Sen. Richard Shelby (R-Ala.) and from Rep. Martha Roby.

“After I had a nomination, I had to redo the entire application process this year,” Jones said. “Then in February of this year, my admissions officer from West Point called me with the good news.”

Jones has been at Marion Military Institute, where he earned his associate’s degree in science.

“Being at Marion really helped a lot,” Jones said. “In high school I didn’t really study a lot, but Marion helped me learn better study habits and prepared me for life in the military.”

Jones plans to major in engineering institution with a minor in foreign languages. After West Point, he is required to serve five years in active duty and three years of reserves, if he does not plan to continue active duty.

Even though he received his associate’s degree from Marion, he will have to start over on classes and go four years to West Point to graduate.

“I’m going to have to start over, but there is a program where I can test out of classes at West Point to speed up the process,” Jones said.

Jones said that the biggest challenge of his education so far has been physical training.

“I think waking up for PT at five o’clock every morning was the hardest thing,” Jones said. “But eventually I just got used to it.”

Jones’ grandfather, Rex Jones, and his father, Troy Jones, are the two men that give him his inspiration.

“My grandfather was an all around great person,” Jones said. “He was very involved in the community and always would help others. My father worked very hard and dedicated everything to his family. He has been so supportive of what I have done to get where I am.”

In Jones’ spare time, he enjoys going to the lake.

Jones begin his journey at West Point on July 1.