Wilkes retiring after 38 years in banking 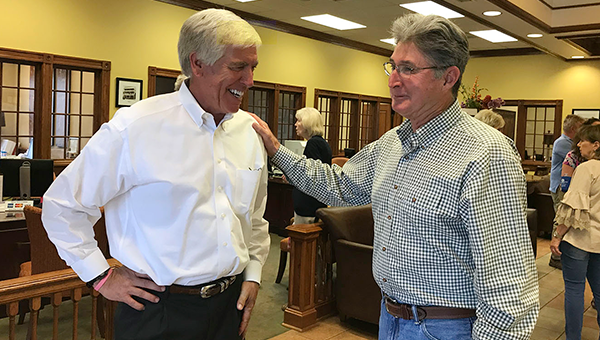 Wilkes has spent 38 years in the banking. As a graduating Auburn student, he interviewed with restaurants, hotels, banks and insurance companies. He took a job at UPS in Montgomery, unloading trucks.

“It was the hardest work ever,” he said.

Eventually, he found a banking job in his hometown of Columbus, Ga.

At Auburn, he also met his wife, Beth, an Andalusia native who convinced her husband to move here. Wilkes’ mom grew up in the area and was a Straughn graduate, so he had always visited grandparents here.

“Beth wanted to come home,” he said, “and it worked out great.”

Commercial Bank later became First Alabama, and then Regions. Later, Wilkes began working to establish SIB, and has been its CEO and president since opening day on Monday, Dec. 4, 2006.

He says he plans to do what other retirees do – hunt, fish and visit his grandchildren.

“I don’t have any other plans,” he said.

Through the years, he’s been active in many civic endeavors, and coached his daughters in sports. He also is a runner. The Wilkes are active in Bethany Baptist Church.

His retirement becomes effective May 21, when Micah Garner will become president and CEO.