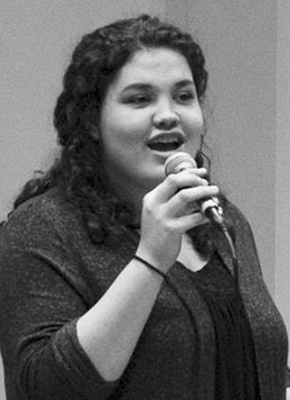 Lorren Shaffer will perform in NYC.

Andalusia High School alumna Lorren Shaffer will add her name to the list of vocalists who have performed at Carnegie Hall, as she travels with the Troy University Concert Chorale to New York City next week.

Shaffer has been in the Troy University Concert Chorale for two years and will travel with the 37-voice group to New York City for four days next week to sing at Carnegie Hall.

“It is super humbling,” Shaffer said. “Just to come from a small town in Alabama and now be singing at Carnegie Hall, I never dreamed of having this opportunity.”

The group will perform on May 25, and stay in New York City for four days before the performance to rehearse.

This will be Shaffer’s first time to New York City.

“I’m just so ready to experience the city,” Shaffer said. “I’ve never been before so I am very excited.”

The choir held various fundraisers and benefit concerts to make sure they could afford the trip.

“We reached out to several people for donations,” Shaffer said. “As well as held fundraisers like Pie A Professor. We also held benefit concerts where people could donate. That is where a lot of the money came from.”

Shaffer said that the Troy University Foundation was the first group to donate money towards the trip.

The students’ director felt inspired by their ability to rally together.

“A year ago when we knew we had to raise all the money for this, we decided right there we would leave no one behind,” Dr. Diane Orlofsky said. “I’ve watched as they’ve done so many different things to raise funds and they looked out for each other.”

Orlofsky said that it was amazing to see 37 young people come together to raise the money.

“They’ve already shown me team effort and a desire to sound as good as they can,” Orlofsky said. “They’ve worked hard on the music and are approaching it with a level of maturity that has really impressed me.”

Shaffer said that the people and relationships she has made has been the best part of being in Concert Chorale.

“Once you are a part of this group, you become family,” Shaffer said. “I wouldn’t have been able to be as confident as a person if I hadn’t had met the people in this group.”

The show will highlight several compositions by Dr. Eric Barnum, who invited the choir to sing at Carnegie Hall.

“We have already done two pieces that were commissioned especially for us,” Shaffer said. “The hardest part of his songs for me is making sure that I blend my voice with every other part.”

Shaffer’s parents were ecstatic when they found out the news.

“My dad knows about Carnegie Hall’s reputation a little more so he is thrilled,” Shaffer said. “He has family in New York so he has been several times.”

Shaffer said that her entire family is just as humbled and excited as she is.

Along with being a part of Concert Chorale, Shaffer is also a part of “Frequency,” Troy University’s Vocal Jazz Group, where she has had several solos, and she is a part of the worship team of Pursuit, a college student led worship group.

“I think being a part of Concert Chorale has helped my voice immensely,” Shaffer said. “Before I joined the group, I was singing more jazzy and worship stuff so getting accustomed to how I should shape my mouth and things like that for choir singing it has helped my voice a lot. My range has definitely grown, sometimes when I sing I think my voice belongs to a different person.”

Shaffer is majoring in counseling with a minor in music industry at Troy University, and her dream job after graduating from Troy would be to become a worship leader.