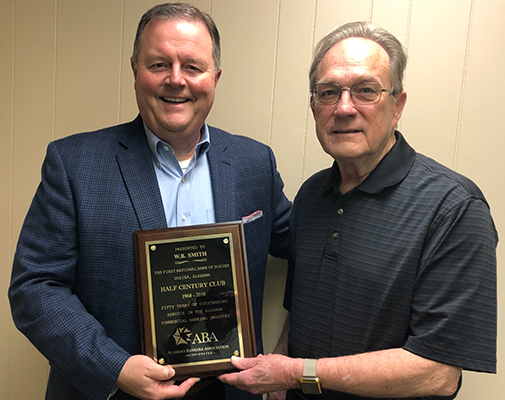 Smith, the president and CEO of the First National Bank of Dozier, was recognized as an official member of the “Half Century Club” with a 50-year service plaque.

Latham said that the “Half Century Club” is a special group and that it has a small number of members. Community banks seem to produce the most of these members, he said, probably due to the close personal relationships that community bankers have with their customers.

Smith began his banking career in February of 1968 at the Brantley Bank and Trust Company. He later moved to Dozier in 1982, where he began his work at the First National Bank of Dozier.

“As long as you enjoy your work, it is not a job,” Smith said.

Through his 50-year tenure he has served in various roles and was named president of the Dozier bank in 1984.

Smith has watched banking adapt throughout the years.

“Today it’s all digital and computerized. In this time of modern technology, there are more banking transactions done by the Internet than in lobbies of banks,” Smith said.

Smith spoke more about the almost “paperless” society and said one day in the near future that will be a reality.

“But I can never imagine the service for customers not being the most important factor in banking, just as it was over 100 years ago when The First National Bank of Dozier was organized,” he said.

The First National Bank of Dozier was organized in 1910, making it one of the state’s oldest banks at 108 years.

Smith thanked the bank’s customers for their support, loyalty and friendship.

Smith currently serves as chairman of the Covington Electric Cooperative Board of Trustees, and also is a member of the PowerSouth’s board of trustees.

He and is wife, June Layton Smith, have two daughters and sons-in-law, Jessica Smith Meriwether and husband John, and Jill Smith Carrol and husband Van.

They have three grandchildren, Sam Meriwether, Layton Meriwether and Willa Carroll, all of Birmingham.