HOW SWEET IT IS! [with gallery]

Ethan Wilson dazzled on the mound in game two, and was named the series MVP.

Will Clark puts a big swing on the ball. 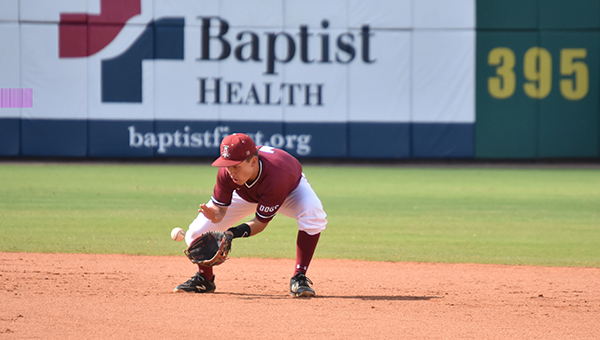 Ayden Amis makes a play at second base. 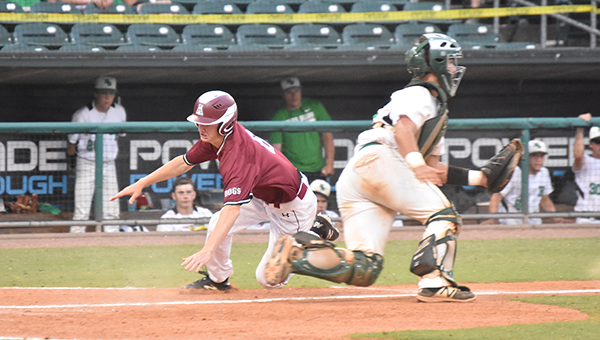 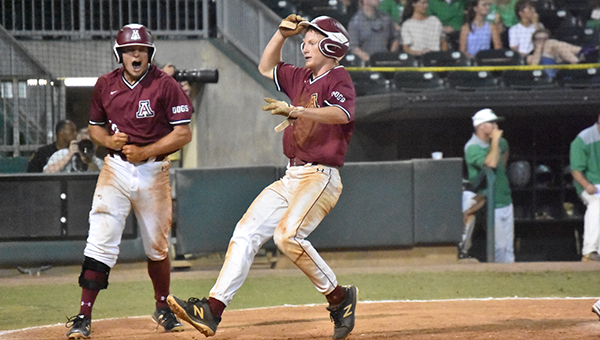 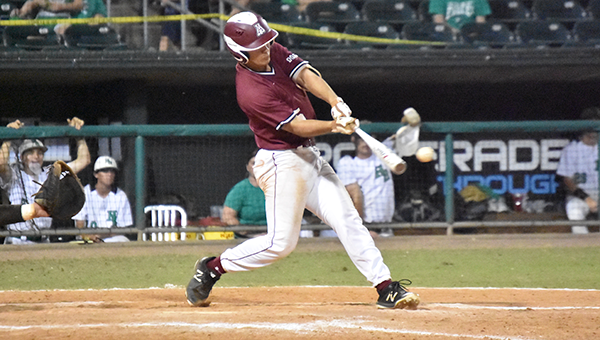 Garrett Davis came up big for the Bulldogs in the top of the seventh inning. 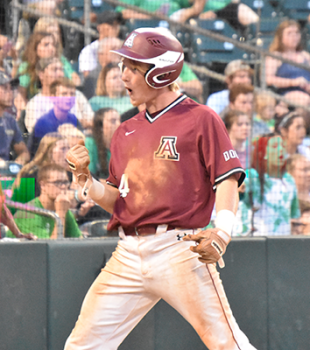 Gill Morgan celebrates after scoring a run in game three 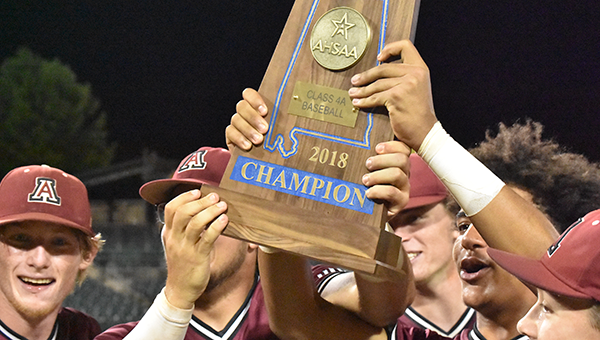 The Andalusia High School Bulldogs won the school’s first-ever state baseball championship Wednesday after defeating Hokes Bluff in Game 2 and Game 3 of a best-of-three series in Montgomery. The Bulldogs made it to the fourth round of playoffs in football and basketball earlier this year, before finally breaking through what players and coaches had begun to call the “fourth round curse” last week. Pitcher Ethan Wilson, who was named state tournament MVP, was on all three of those teams. 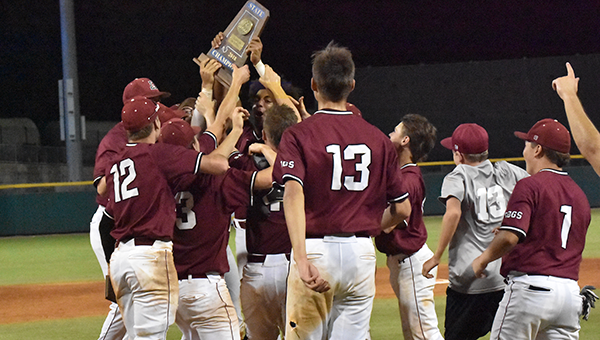 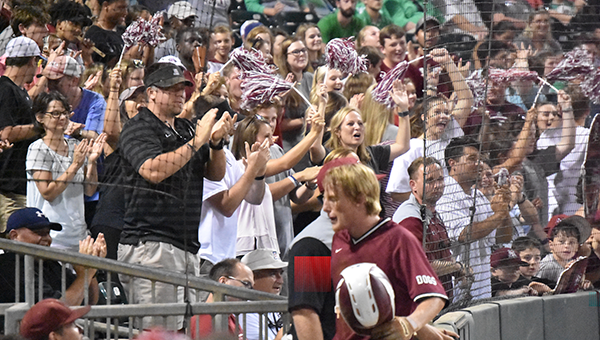 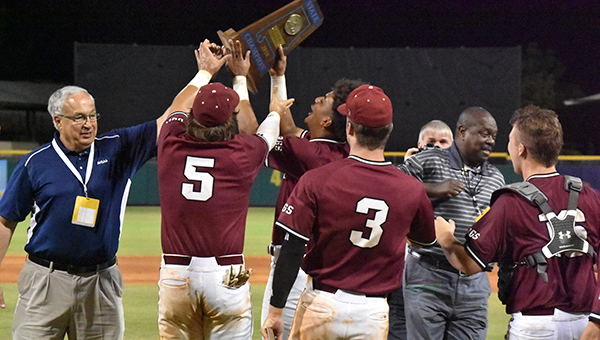 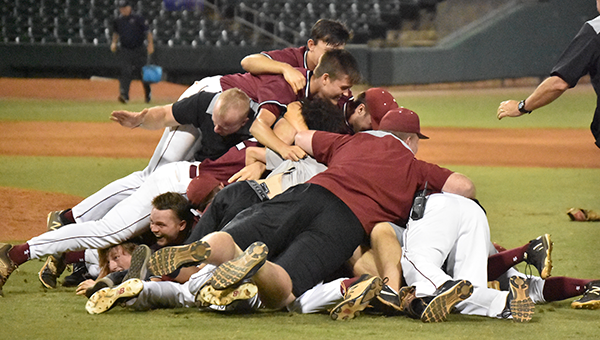 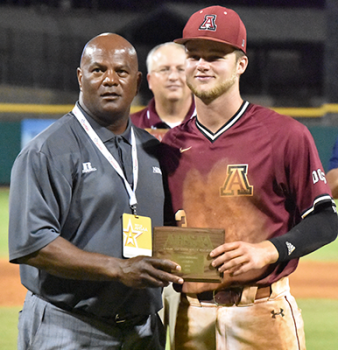 Ethan Wilson, tournament MVP, also made it to the fourth round of finals on the football and basketball teams this year.

The Andalusia Bulldogs claimed their first ever AHSAA baseball state championship after knocking off the Hokes Bluff Eagles in two games on Wednesday at Riverwalk Stadium in Montgomery.

Facing elimination in the second game of the best-of-three series, the Bulldogs fought their way to a 2-1 victory behind a dominant performance on the mound from Ethan Wilson.

Wilson started the top of the first inning with a scorching line drive, but it found the glove of the Eagles’ right fielder for the first out.

Garrett Davis reached first next after an error, and moved to second on fielder’s choice from Hogan Nichols.

That was as far as Davis would get in the opening frame.

Wilson got the got the first batter in the bottom of the first inning to ground out to Ayden Amis for the first out of the inning before getting a strikeout for the second out.

Another ground ball to Amos finished off the opening inning.

In the bottom of the second inning, Wilson struck out a pair of batters in a 1-2-3 inning.

Andalusia got one-out runner when Gill Morgan was hit by a pitch, but was then erased on a fielder’s choice off the bat of Wilson.

Wilson then stole second and moved to third when the catcher’s throw went into center field.

The Bulldogs then grabbed the lead when Davis drove a double into the gap to score Wilson with ease.

Davis then moved to third on a wild pitch and advanced home on another wild pitch to put Andalusia up 2-0.

Hokes Bluff came back with a couple of base hits and a walk to score one run.

On the play that the runner scored, Wilson tripped over the catcher’s mask and appeared to roll his ankle.

After a brief delay to allow Wilson to tape and test his ankle, he got back on the mound and finished out the game.

In the bottom of the seventh inning, Wilson got the first batter to pop out to Sebaskin Stallworth in right field and then struck out the next two batters to finish of the victory and force a deciding game three.

The Bulldogs claimed the state title win with a 10-6 victory in the final game of the state championship.

Wilson led off the top of the first inning with a triple and then came around to score a sacrifice fly from Nichols.

In the bottom of the second inning, the Eagles took advantage off two wild pitches to take a 2-1 lead.

Davis started the top of the third inning with a one-out single and moved around to second when Nichols was hit by a pitch.

Walks to Stallworth and Will Clark allowed the Bulldogs to tie the game.

The Bulldogs took the lead when Chip Morgan drove in a run with a sacrifice fly.

Hokes Bluff came right back and the tied the game in the bottom of the third inning.

Jacob Cravey drew a one-out walk in the top of the third inning and came around to score on double from Gill Morgan.

Nichols then came through with an RBI single to put Andalusia on top 5-3.

The Bulldogs then took advantage of a couple of wild pitches to take a 7-3 lead.

Hokes Bluff scratched their way back into the game and forced the Bulldogs to make a pitching change.

Wilson walked to start the top of the sixth inning and then came around to score on a scorching double from Nichols.

Hokes Bluff got a leadoff walk to start the bottom of the sixth inning, but C. Morgan and Amis teamed up for a double play up the middle to stifle the threat.

In the top of the seventh inning, Hokes Bluff elected to intentionally walk Wilson to load the bases, and Davis made the Eagles pay dearly.

With the bases juiced, Davis laced a ball down the third-base line to give the Bulldogs a 10-6 lead.

Hokes Bluff got a one-out single in the bottom of the seventh, but Amis turned another double play to seal the Bulldogs’ state championship victory.

“First of all, I said last week that was gutsiest performances that I’ve ever been a part of as a head coach and tonight matches that,” Andalusia head coach Tyler Dent said. “We had a tough one last night. We didn’t play very well. We didn’t pitch very well, we didn’t field well and we didn’t hit well. Today we came back and refocused. Hats off to Ethan Wilson in the first game. He twisted his ankle on a freak play. He grinds out after that and finishes the game for us in a 2-1 ball game. There in the third game I told them this morning that anything could happen in game three and it did. We battled, battled and battled and scored enough runs to win. Hats off to Chip Morgan and his brother Gill coming in and slamming the door there at the end. That’s not easy to do. I’m extremely proud of these guys. Ayden Amis, an eighth grader, turns two double plays in game three of the state championship. What an unbelievable baseball player that he is.”