Kennedy’s been a trooper 22 years 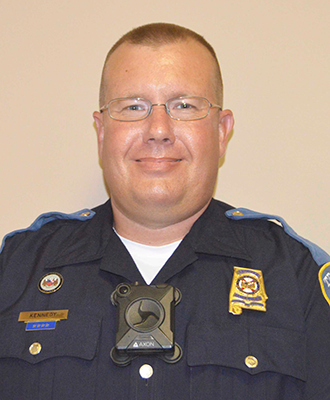 Editor’s note: This is the second in a series for Law Enforcement Memorial Week.

Matt Kennedy started his career in law enforcement at the age of 20 and never looked back.

“I got inspired to do law enforcement by my brother-in-law, who was a Daphne police officer at the time,” Kennedy said.

“At the time, I was going to junior college at LBWCC and it was a time that I didn’t really know what I wanted to do in life.”

Kennedy, at the age of 20, started his career as cadet who was waiting for training to become an Alabama State Trooper.

As a state trooper, Kennedy’s primary job description is to enforce traffic laws and investigate accidents.

“I left for academy when I was still 20 and I actually turned 21 while in the academy. My brother-in-law was actually there the same time I was,” he said.

Once Kennedy graduated from the academy, he was assigned to Conecuh County where he worked for a little over five years.

Kennedy, who was born and reared in Andalusia, was thankful to be close.

“I was very fortunate to be put close to home as I was,” he said.

After that, Kennedy was assigned to Covington County, and he’s been here for 16 years.

In total, Kennedy has nearly 22 years of working as a state trooper.

Kennedy said that one thing he’s learned in his time of law enforcement is people.

“I learned a lot about people,” he said.

“This job has made me have a lot of contact with the public and I’ve met so many people. That’s probably my favorite part.”

The job has supported his family.

“Sometimes the long hours and odd shifts can keep you away from your family but it’s been good to me and my family,” he said.

Kennedy and his wife, Nicole, have two children. He said he likes to do anything that involves the outdoors and enjoys watching Deadliest Catch and anything that shows on True Grit.