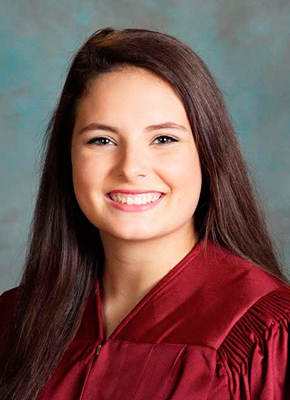 Andalusia High School Salutatorian Callen Woodard knew that making good grades was expected from her ever since elementary school.

“It was something my parents expected from me,” Woodard said. “Then when I got to middle school it was just something that I continued to do.”

Woodard said that her competition with Valedictorian Baylee Robertson has been great.

“I didn’t really compete with her in middle school,” Woodard said. “I was first all throughout high school until my junior year, then we swapped places. She definitely deserves it though, she stepped up when I slacked off.”

Woodard is very active in extra curricular activities at AHS including Student Government Association, being in band all four years and being drum major her senior year, Key Club, Anchor Club and Spanish Club.

Outside of the classroom, Woodard is involved with the Cedar Grove Church of Christ youth group, Meredith Miracle’s Cookies With Characters, she has planned a 5K for a children’s hospital and works at Camp Wiregrass as a counselor. She also is Covington County’s 2018 Distinguished Young Woman.

Her parents and her nanny, Audrey Wilson, are her role models.

“My nanny has babysat me ever since I could remember,” Woodard said. “She has played a big part in who I am, and now we are such good friends. I love her so much.”

“I don’t know what I plan on doing with my degree,” Woodard said. “I guess we will see.”

Woodard is the daughter of Allen and Beth Woodard, and her grandparents are Edward “Jerry” and Gale Woodard and Mary Ann and Jack Callen.