New life for the pipes: FBC will celebrate organ upgrade with concert Sunday 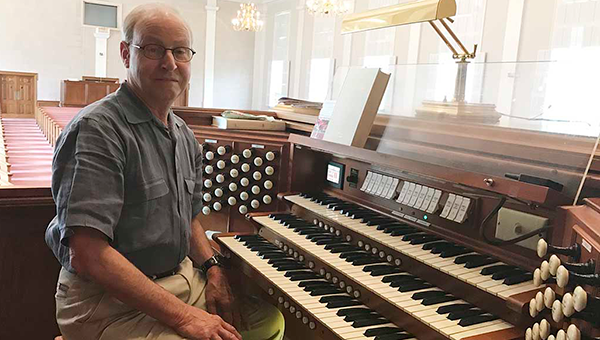 First Baptist Church's Reuter pipe organ recently got a $34,000 upgrade. Organ expert David Finch of Florala, who has a master's degree in organ performance and who installed the upgrades, will be among the featured organists in a Sunday night performance.

First Baptist Church of Andalusia will celebrate improvements to its 1976 Reuter pipe organ with a concert featuring four organists on Sunday night.

Associate Pastor Dwight Crigger said the organ was upgraded, thanks to a gift from Mrs. Clarice Kearley of Dallas, Texas, in memory of her late husband, Richard Irven Kearley Jr.

David Finch of Finch Organs, assisted by his wife and business partner, Susan, installed the upgrade. Most of the wiring was replaced and a new computer board replaced an original one. The new system allows an organist to record music and store it on a jump drive. When played, the music heard is the actual pipe organ, not a recording of it.

Other added features allow the organist to play music as written, but program the organ to transition the music to a different key.

The Finches live in Florala, but travel much of the Southeast upgrading, repairing, maintaining and tuning organs. David Finch, who has a master’s degree in organ performance from Hartt College of Music at the University of West Hartford in Connecticutt, also serves as organist at First Presbyterian Church in Florala. 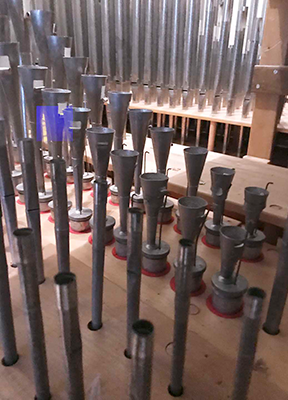 The organ’s pipes reside in rooms on either side of the sanctuary, and have a separate heating and cooling sys-tem for proper maintenance.

The Finches have been maintaining the organ at First Baptist Andalusia since 1982, and also tune and maintain the organs at the Methodist and Presbyterian churches here.

Mrs. Finch explained that much of the original wiring in the First Baptist organ was cotton, and needed to be replaced. The pipes are housed in rooms on either side of the sanctuary, and controlled by a board beneath the baptistry.

According to a church history, the Reuter organ was installed in 1976. It was built in Lawrence, Kansas, and the cost – including installation – was $85,000. Finch estimated it would cost $835,000 to build and install the organ today. The instrument has more than 2,500 pipes, and its own heating and cooling system.

Organs generally need to be tuned twice each year, Finch said, “when you turn the heat on in the fall, and when you switch to air in May or June.”

Sunday’s concert, which begins at 6 p.m., will feature FBC organist Martha Givhan; John Beasley, who plays organ at St. Mary’s Episcopal and First United Methodist on Sunday mornings and at First Baptist on Sunday nights; Dr. Steve Hubbard, who plays the organ at First Presbyterian of Andalusia; and Finch.