A two-week investigation by the Covington County Drug Task Force ended in the arrest of an Andalusia man last week. 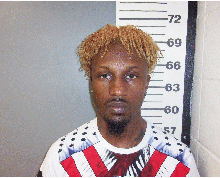 This isn’t the first time narcotics were located in Hall’s house or possession, however.

In April, the DTF executed a search warrant at the residence located more than 28 grams of crack/cocaine, meth, a firearm and marijuana, which led to Hall’s arrest and a bond of $833,000 bond in the Covington County Jail.