Memorial Day: Not all the heroes came home 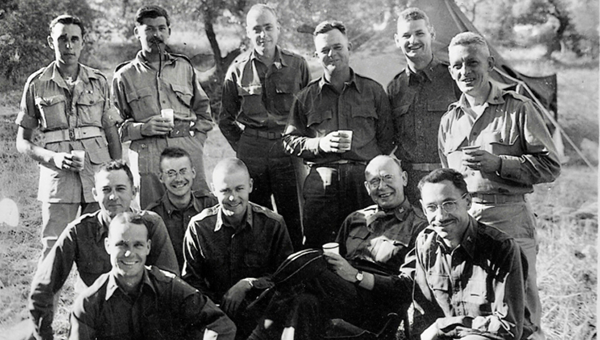 Last known picture of Maj. O’Neal and others from the 39th Combat Engineers taken in Sicily on Aug 20, 1943. Maj. O”Neal is 3rd from the upper right [holding a cup]. Commanding Officer, Col. Tom Green is seated and the 39th Executive Officer, Maj. Bob Blasen, is to Maj. O’Neal’s right.

Memorial Day is a day in which we honor those who gave their lives in the service of their country. Most of us have known some of the veterans of WWII, that group celebrated by Tom Brokaw as The Greatest Generation. As great a thrill as it has been to know and talk to some of them, I feel that too little is known about those heroes who never came home.

I’m honored to have known many members of the Greatest Generation. Their stories were often given reluctantly, because many of these Heroes “just felt that they were doing their duty to their country.” Others rarely talked about their wartime experiences because it brought back many painful memories that they would rather not recall. This story is about one local hero from Andalusia who never came back to tell his story.

Lester C. O’Neal was born in Andalusia, on November 28, 1906, to Clanton S. O’Neal and Ida R. O’Neal. He had eight brothers and one sister. After graduating from Andalusia High School in 1925, he attended the University of Florida from 1925-6 before transferring to the University of Alabama. He graduated from Alabama in 1929 and entered Medical School at LSU – New Orleans. He received his Doctor of Medicine degree in 1933 and interned at Charity Hospital in New Orleans. O’Neal had married Louise Pelham of Andalusia in 1929, who accompanied him during medical school and his internship. Upon completing his medical and surgical internship, Dr. and Mrs. O’Neal moved to Andalusia where he opened his medical practice in 1934. That same year, a daughter, Louise “Tillie” O’Neal was born. Dr. O’Neal had a successful medical and surgical practice from 1934 until November 26, 1940, when he volunteered to be mobilized for active military service with the 117th Field Artillery Battalion, the Andalusia National Guard Unit which was part of the 31st [Dixie} Division. Dr. O’Neal had joined the reserve unit in 1934. As Regimental Surgeon for the 117th, Dr. O’Neal was given the rank of Major and traveled to Camp Blanding, Florida, with the 117th for training. In February of 1942, Major O’Neal was sent to Camp Bowie, Texas and assigned to the 27th Construction Battalion as Battalion Surgeon. After maneuvers in Louisiana, he was reassigned to the 39th Engineer Combat Regiment.

The Regiment traveled overseas to Oran, Algeria, in January of 1943. In letters sent back home to his mother by Maj. O’Neal, he talked about some of his travels with the 39th. They included traveling to St. Cloud to build a prisoner of war enclosure, going to Paraguay to build a railroad and a supply dump, going to Anne Frantessa to construct a school, and also to Mostageum to guard the port and docks. Maj. O’Neal said, “It was my duty to see that all these troops were looked after medically, so I traveled the routes with all units”.

In May 1943, the 39th, along with Maj. O’Neal, left Oran and moved 100 miles south to the Atlas Mountains, near Magenta for intense training in preparation for the invasion of Sicily. By June, they had moved to Arzew at the 5th Army Invasion Training Center. There, the 39th, along with Maj. O’Neal, was attached to the 1st and 4th Ranger Battalions, under the command of Col. William O. Darby. These units under Col. Darby were known as Darby’s Rangers. There was a movie about this unit produced in 1958, called “Darby’s Rangers.” After training as a part of Darby’s force, the Engineers along with the Rangers, traveled to Algiers where they embarked aboard ships for the invasion of Sicily. They were the first troops to land in Sicily on July 9, 1943. For that invasion, that landed at Gela in Sicily, Darby’s force became a part of Gen. Terry Allen’s 1st Infantry Division which was part of Gen. George Patton’s 7th Army. After the landings at Gela, there was fierce fighting with many casualties. Maj. O’Neal notes in his letters home, “I am doing well and have had no battle wounds. Speaking of wounds, I want to tell you how these men react to their injuries. It is almost unbelievable. I can see these men get hurt and never does one complain. I saw where one man cut another man’s arm off when a big tank turned over on him and caught him under the track. At once, the tank began to burn and when the man could not be gotten out. The other man cut the arm down to the bone and then shot the bones in two. Both men had to be hospitalized. The next day, when I saw the man in the hospital who had lost an arm, he was helping nurses carry out buckets of used bandages.” O’Neal talked about reading about the Rangers in the papers and said “We were attached to the Rangers. We did a swell job and did not have a single man killed.” After taking several key towns, the Rangers were relegated to guarding the flanks of the army as they advanced to Palermo. The Sicilian campaign would end in August, 1943, when Messina was reached and the Axis forces left for Italy. Maj. O’Neal and the Rangers would next participate in the invasion of Salerno as a part of Gen. Mark Clark’s 5th Army.

The invasion of Italy began with Operation Avalanche, the codename for the Allied landings near the port of Salerno, began on September 9, 1943. Major O’Neal’s unit, the 39th Engineer Combat Regiment, landed at Paestum [the main landing area for the invasion] some six days later. As the fighting proceeded inland, the 39th was tasked with repairing and clearing highways, erecting bridges over canals and streams and constructing bypasses where needed. The invading allies had nearly been forced back into the sea by the Germans just prior to the landing of the 39th. Gen. Mark Clark received the Distinguished Service Cross [the second highest award for valor in combat] for his leadership in defending the counterattack and securing the landings. The 5th Army, under Gen. Clark, captured Naples on October 1. From there, they [and the 39th] proceeded north to the Volturno River,where the Germans had set up one of their defensive lines. Maj. O’Neal’s group, the 39th Combat Engineers, constructed a ferry across the Volturno and began winterization of the 8th Evacuation Hospital, nearby on October 15. Maj. O’Neal worked between the 8th Evacuation Hospital and the newly formed 38th Evacuation Hospital located north of Naples near Riardo.

On November 7, Maj. O’Neal was traveling near Riardo in a command car with three other officers when they were attacked by a group of German fighter planes. Maj. O’Neal was the only casualty, having been hit in the helmet by a 20mm shell. He was buried that same day in a temporary cemetery near Marzanello Nuova.

The 39th Combat Engineers continued with the Allied Armies in securing Italy from the Germans.

On November 21, some two weeks after Maj. O’Neal’s death , the family was notified by Western Union. Fortunately, Miss Cicily Raley, a family friend was the Western Union operator, and she personally carried the telegram to the family. After this notification, a memorial service was held at the First Methodist Church of Andalusia, on December 1, 1943.

Almost five years later, on August 19, 1948, the family was notified by Western Union, that the remains were en route to the U.S. and that they would be notified three days prior to further shipment to Andalusia. A short time later, Maj. O’Neal’s remains arrived, escorted by an Army officer of equal rank. Mrs. O’Neal and the family met the train at the L & N depot on South Cotton Street upon arrival. Foreman Funeral Home accepted the remains. Not long after that, burial took place at Magnolia Cemetery with full military honors.

Author’s note: I wish to thank Mrs. Tillie O’Neal Hamiter and her husband, Lt. Col. James W. [Bill] Hamiter for their help in writing this tribute to her father.