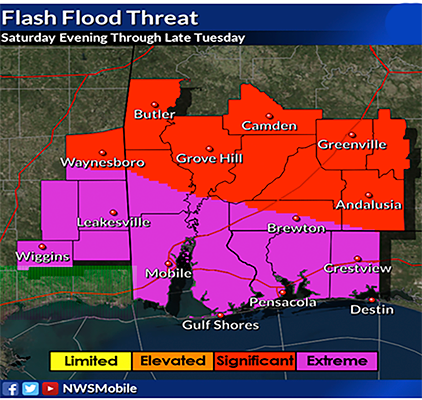 The National Hurricane Center upgraded the low-pressure system centered just east of the Yucatan Peninsula to Subtropical Storm Alberto on Friday, and local emergency officials have some advice for beach-goers this weekend.

“Expect a lot of rain,” EMA Director Susan Harris said. “We should start feeling the impacts of the storm early Saturday, and it will linger on into the week.”

Harris said people traveling to the beach will need to get accurate information about safety from the storm.

“They need to be aware of the area,” Harris said. “Especially if they are traveling and it is raining. They will need to get accurate information about the area that they are in and make sure to get updates about the storm.”

This is the first named storm of the 2018 Atlantic Hurricane season, which officially begins Fri., June 1.

“When a system starts building, there are different levels it goes through,” Harris said. “Once it gets to a certain strength, that is when they will name it.”

The World Meteorologist Organization has a strict procedure established for naming storms.

For Atlantic hurricanes, there is a list of male and female names, which are used on a six-year rotation.

On Monday, the forecast shows that there will be thunderstorms and a 100 percent chance of rain, with wind speeds up to 21 miles per hour.