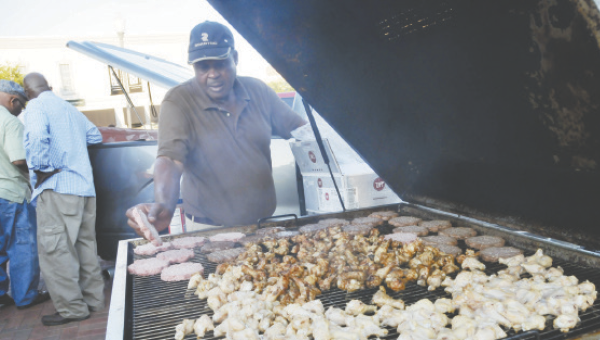 Donnie Graham mans the grill at a previous Tailgate event on the Square. File photo

The Sixth Annual Tailgate on the Square organized by the First Baptist Church on Whatley Street will still have the same great fellowship and food, Pastor Daryll Calloway said.

“The best part of the event is the speakers and the fellowship,” Calloway said. “We do it so that all of God’s children can come together and show that the Christian life is a good life.”

What started out as a men only group has expanded into a fellowship of all people.

“We started it as a men’s group to get together in friendship and fellowship,” Calloway said. “But as the years have gone by we expanded it to women as well because we don’t want to leave anyone out.”

He said that in the midst of all the diversity that everyone is on the same walk with Christ.

“It is a place of friendship,” Calloway said. “Anyone can come and not feel judged when they walk up.”

There will be seven or eight churches in attendance to the event bringing several different types of tailgate foods.

“The First Baptist Church of Whatley will be bringing hamburgers, hotdogs and watermelon,” Calloway said.

Calloway said that when they first started the event, he did not think he would do it again.

“Personally I did not plan on doing it again,” Calloway said. “But after the response of everyone that came, it was overwhelming and we had to do it again.”

Calloway also said that people can bring food if they would like.

“Whatever you prepare for a tailgate, you can bring,” Calloway said. “Everyone is welcome to come.”