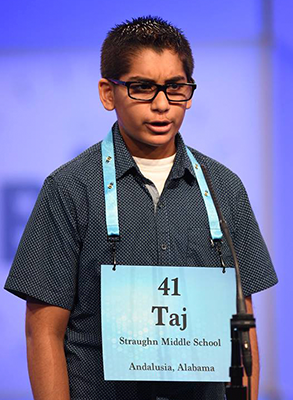 Local star speller Taj Patel took the stage yesterday in Washington in the second round of the Scripps National Spelling Bee and advanced to the third round by spelling “vasodilation.”

Patel, who is a student at Straughn, has won both the school and county spelling bees numerous times. He came in second in Alabama in March, and thought he’d lost out on a chance to participate in the nation event. But in April, he was invited to Washington.

In the state event, Patel went through five hours and 13 extensive rounds of competition. A total of 747 schools participated and 53 of the state’s best spellers were Patel’s opponents at the state event.

The Scripps National Spelling Bee’s website indicates that initial coverage of the event will air on ESPN 3 beginning at 8 a.m. until 5 p.m.

When the event opened Tuesday morning, there were 519 spellers. Only 452 spellers moved on to spell today.

Patel still holds the record for being the youngest to ever compete in the Alabama Spelling Bee. He first competed when he was 6.