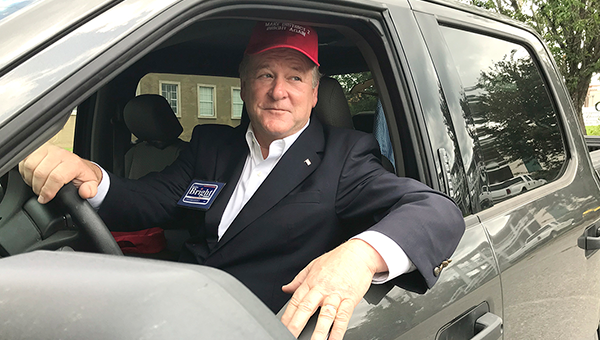 Former U.S. Rep. Bobby Bright was on a “pickup-truck tour this week.

Former U.S. Congressman Bobby Bright, who is seeking the nomination for his old seat – this time as a Republican – is traveling across the Congressional district in a pickup truck in a tour he’s dubbed “Make District 2 Bright Again.”

Bright, who served as a Democratic member of Congress for two years, said he has always been a conservative. He is making support of President Donald Trump’s policies an issue in his campaign for the Republican nomination and has a slogan on a red cap similar to the one Trump uses to campaign.

Bright has criticized the incumbent, U.S. Rep. Martha Roby, for comments she made about Trump during the presidential campaign.

Bright said he has always pledged not to vote on new taxes, and said he would like to see the country use a common-sense approach to immigration, especially since Alabama farmers depend upon immigrants for labor.

The priorities for anyone representing the Second District should be agriculture and the military, Bright said.

On Wednesday, his “truck tour” began in Prattville and included stops in Greenville, Andalusia, The Chicken Shack in Luverne, Enterprise and Dothan. In Andalusia, he visited The Star-News and WAAO.