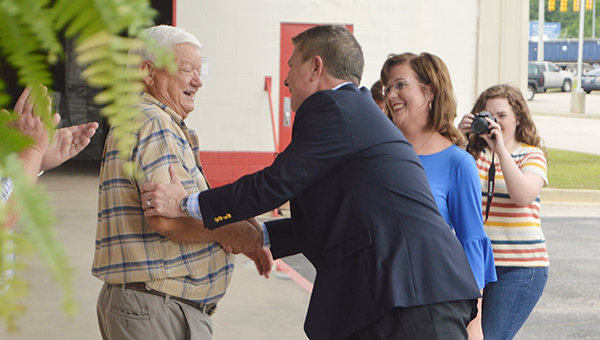 Playing on his “The Time Is Now” theme, Dawson brought his 36-county bus tour to Covington County, with stops in Andalusia and Opp.

“Why is it called the time is now? We started listening to everything that is going on in our state, and the time is now for us to champion the cause of pro-life, to de-fund Planned Parenthood and do family planning another way. It is time for us to stop talking about it and time for us to actually do something about it,” Dawson said in his campaign stop at Barrow’s Furniture in Andalusia. “The time is now to get rid of common core and bring in common sense to our classrooms. Where we can teach young men and women to read, write and do correct arithmetic before the third grade.”

Dawson said that the chance of young students going to prison in later life if they cannot read by the third grade is overwhelming.

“Now is the time to do something about it,” Dawson said. “People say it is always a money issue in Alabama, I don’t think so, it’s a leadership issue. The time is now to understand that middle school is when we need to start teaching the fundamentals of economics, so we can teach our kids how to be leaders.”

Dawson also said it is the time for Alabama businesses “to be set free. “

“It’s not about taxes. Alabama is a low tax state, but what they get us on are unnecessary regulations and unending licensing fees that seem to strangle Alabama business owners,” Dawson said. “The thing with Alabama business owners is that they pay Alabama taxes and if they don’t have these fees then it will set our economy on fire. We are already seeing what it is doing nationally. It is time to bring that fight back home to Alabama.”

Another point central to Dawson’s campaign is term limits or voter recall.

“The time is now for us to start introducing term limits. If we can’t get term limits then what we will do is introduce voter recall,” Dawson said. “Give us one or the other. That way if a yahoo does mess up then we don’t have to wait until the next election. We give the voice back to the people. It allows us to give accountability to those who are elected in his or her position.”

Dawson said that his main job as governor of Alabama would be to protect state citizens and children. He wants to voluntarily arm teachers to have safer schools.

“I think that we need to arm our teachers,” Dawson said. “But with parameters, first I would make it voluntary. I wouldn’t want to lose a good teacher because he or she doesn’t want to be armed. Second, I would make sure that they are required to go through extensive training. Third, I would make sure that students do not know which teachers are armed. Fourth, I would have all armed teachers coordinate with local law enforcement and make sure that they go through all background checks and mental health checks. Finally, I would offer a stipend to all armed teachers. Why offer a stipend to several different coaches and not the teachers who are keeping us safe?”

“We have been here many times, prior to the campaign, ministering and visiting people,” Dawson said. “Covington County was actually one of the very first stops after we announced that I was running.”

Dawson said that the corruption in Alabama politics motivated him to run.

“When we started hearing about all the corruption in Alabama politics we said, ‘This is enough, not on my watch,’ ” Dawson said.

“David walked out onto the battle field in much the same way as Scott is, with no experience, or at least that is what his detractors would say,” Merrell said. “I would say that is his greatest quality, that he is not a lifelong Goat Hill resident.”